One of the things I’m trying to do to make this Project as un-arduous as possible is to make recipes when fresh ingredients are in season. Since this is the beginning of the holiday season, readers should prepare themselves for the onslaught of apples, cranberries, and (ugh) dried fruit.

Contrary to the name of the recipe, this is more like poached apples. The basic idea is to make Jell-O (strawberry in this case), season it with lemon slices and a cinnamon stick, and simmer the apples in it. Sounds simple enough, doesn’t it? Again, I have only myself to blame for any wrong turnings in this endeavor. The main problem stemmed from the kind of apple I used, namely, the ones that happened to be in the refrigerator. The recipe called for six baking apples, and there were six apples in the fridge. Bryan bought them, so I wasn’t sure what kind they were, and I really should have been more careful. But I’m getting ahead of myself.

As I peeled and cored the apples the slow, laborious way, with a paring knife, I felt myself getting in tune with the mindset of housewives who typically resort to cookbooks like The New Joys of Jell-O. I quickly lost patience with the chore and wished there was an easier way to achieve the same result. Also, coring apples with a paring knife is a pain in the ass. I had set up the rest of the mise en place and left the apples for last. Since I wasn’t sure how long it would take me to prepare them, I didn’t start the Jell-O poaching liquid until I was well into it, but it turned out that I was over-cautious in that regard, and the apples were already starting to turn a little brown by the time I set them into the saucepan with the liquid, where they were to simmer, covered, for 15 minutes, being basted and turned occasionally. The aroma from the apples cooking in the Jell-O was not at all unpleasant, but at the same time it reminded me overwhelmingly of the gift shop section of Cracker Barrel, which was confusing. I have mixed feelings about Cracker Barrel. 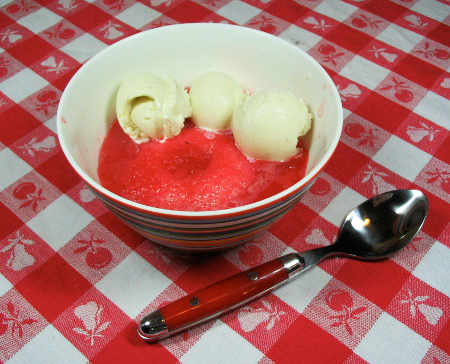 Suddenly, sugary bubbles were starting to fizz up from under the saucepan lid – the apples had gotten past the simmer zone, and when I lifted the lid to check them, four of the six apples had cooked down to shapeless mush. I had used the wrong kind of apples. It was pure, undeserved luck that when the simmering was done there were two apples that had retained enough structure to be used in the photograph.

The recipe called for the apples to be chilled until set, about an hour, before serving. They were in the fridge for longer than that, but they hadn’t set, and that was okay. I garnished the two “good” dishes with scoops of Ben & Jerry’s vanilla ice cream, and it was actually a toothsome little number. My only real complaint was that the cinnamon flavor wasn’t strong enough. (I think the GF R&D drones must have been pretty timid about seasonings as a rule.) Bryan thought it would have been better with some sort of crumble topping, but allowed that this was one of the more palatable entries so far. It almost didn’t taste like a Jell-O dessert, except for the funky aftertaste. The bright red color was vintage 1970s.

I ran out of breakfast cereal and ended up eating the remaining two dishes of what turned out to be strawberry Jell-O applesauce for breakfast for the next couple of days. Nummy nummy num!

Online acquaintance M– pointed me in the direction of a blog entry giving directions for making a gruesome meat hand using the hand-shaped mold. It’s so awesomely creepy it almost makes me wish I wasn’t “mostly vegetarian.” Check it out!