The Hand of Glory is the dried and pickled hand of a man who has been hanged, often specified as being the left (Latin: sinister) hand, or, if the man were hanged for murder, the hand that “did the deed.”

According to old European beliefs, a candle made of the fat from a malefactor who died on the gallows, lighted, and placed (as if in a candlestick) in the Hand of Glory, which comes from the same man as the fat in the candle; this would have rendered motionless all persons to whom it was presented.

— from the Wikipedia entry for Hand of Glory

Ah, October, probably my favorite month of the year. The foliage is colorful, the days are getting shorter but are not yet too short, the air is becoming crisp enough that I can start pulling out all the sweaters I’m finally starting to miss after schvitzing  all summer, and it’s capped off by a great holiday, Halloween. I love Halloween because it’s all about confronting our fears (of death, primarily) by making fun of them. There are no heavy religious overtones to the holiday, relatively little family pressure, and no gift-giving obligations. It’s a chance to indulge the inner drama geek I barely realized I had until a few years ago, the one time of year when I can justify spending more than a utilitarian amount of time on hair, makeup and clothes. 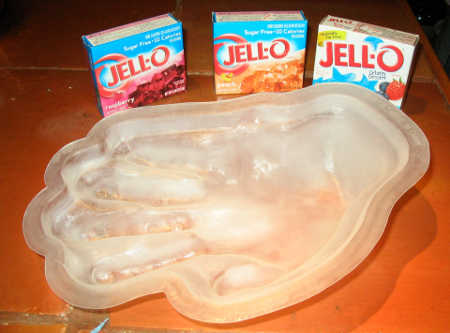 Hand of Glory – the essentials

Hand of Glory is not in The New Joys of Jell-O, but it’s the coolest thing I’ve done with Jell-O to date. During the original Project, my friend K–* loaned me her hand-shaped gelatin mold and asked me to use it to make a Jell-O for the Halloween party that she and her husband F– (a researcher at the Lab) were giving, as they do every year, for Lab folk and other friends. At that point, I had already done enough fruit-suspended-in-Jell-O that I was grateful for the opportunity to get a little creative with it. 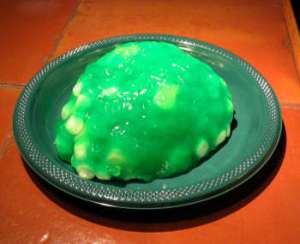 There are a few different body-part molds out there — the hand, the heart, and the ever-popular brain mold. A pretty common way to use them is to combine Jell-O with a creamy substance to create a flesh-like or just plain creepy color. For instance, I’ve been advised that combining red Jell-O and Cool Whip gives a reasonably authentic internal-organ appearance to a heart mold.

I wanted to take it further than that.

I wanted to make a corpse hand, and I wanted it to have some detail, so first I needed to make some dark blue veins. I started with half of a packet of berry blue Jell-O dissolved in a half cup of boiling water, to which I added four drops of blue food coloring, one drop of red, and one drop of green, and then a little ice to cool/thicken it. My notes indicate that I didn’t think the color was dark enough, nor the gelatin thick enough, but piping this into the bottom of the lubed hand mold, following the veins on the back of my own left hand as a pattern, actually worked out pretty well. For good measure, I also added dark-blue fingernails**. 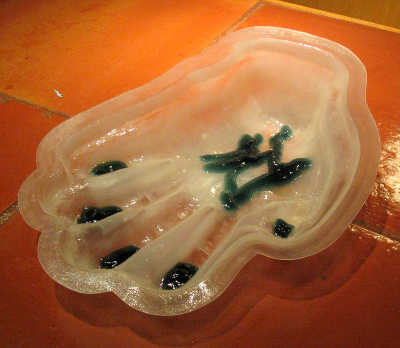 The veins were drawn in with thickened gelatin in a squeeze bottle.

Next was the flesh of the hand. I didn’t mean for this to look like the hand of a fresh corpse, so pink was right out. I added the other half of the packet of berry blue to a three-ounce package of peach Jell-O, using the usual amount of water. I cooled this until it was thickened enough to mix in six or seven ounces of Cool Whip that I’d flavored with a little almond extract, and added a drop of green food coloring. This pleased me greatly.

I had to prop up one side of the mold with a dish towel to keep the blue-green “flesh” inside the hand part of the mold.

I thought that the “mitt” part on which the hand sits should suggest congealed blood, so I did up a batch of raspberry Jell-O with frozen berries. I can’t remember whether it was just raspberries or a mix of raspberries and strawberries (kind of looks like a mix to me), but either way it looked awesome and just filled the mold.

Having learned from my mistakes on Ginger Peach Dessert, I took more care this time and my Hand of Glory came out of the mold as well as I could have hoped. 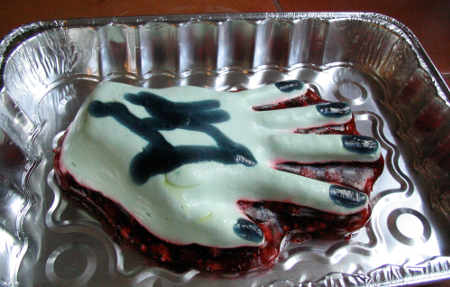 The Hand of Glory is looking good after unmolding – no melty spoodge!

It looked a little plain in that baking pan, though. As they say, the Devil is in the details, and this being Halloween, more details were definitely called for. I added the dirt of the grave (Nabisco Famous Chocolate Wafers, ground up in the food processor with a little melted butter, aka crumb crust) and some gummy worms to complete my little culinary tableau. As I said, the coolest thing to date.

The Hand of Glory in all its gory glory

The Jell-O Hand of Glory was a hit at the Halloween party, mainly as a table decoration, although people ate the gummy worms and the crumb crust “dirt”. Of course, Bryan and I sampled the Hand part, and actually it was pretty good. The flavors blended together well, and I thought it was fun to eat, though clearly I am less squeamish than a lot of people.

The dress is vintage and fits like it was made for me. Scary….

I should mention, too, that my costume turned out surpassingly well. I dressed as a 1950s housewife, and I got a lot of double-takes because people genuinely didn’t recognize me at first. (The blonde wig was a particularly good disguise back when I was 100% brunette.) Several people asked if I was supposed to be Betty from “Mad Men”, but I hadn’t started watching the show then. I just loved the idea of turning up as June Cleaver with a corpse  hand in a baking pan. That’s how I roll.

* K– isn’t a huge Jell-O aficianado, but she is from Minneapolis. ‘Nuff said.

** Legend has it that fingernails continue to grow after you die. Not true. It’s the skin receding that gives the illusion of fingernails growing on a corpse. I just thought you’d like to know that.