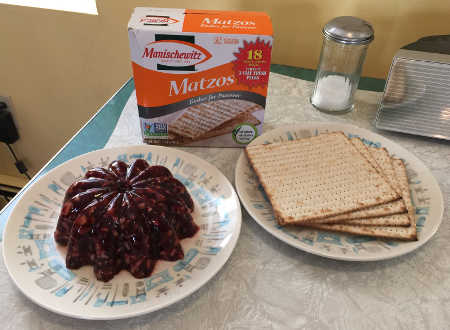 During the original Project, for Passover I decided to try to make a Joy of Jell-O version of the seder plate classic charoset, but with plonk (I draw the line at Manieschewitz) and cherry Jell-O. It was successful enough that, since I didn’t have a photo, I made it again for the reboot:

Dissolve the Jell-O in 1 cup of boiling water. Add 1/4 cup cold water, and wine. Chill over an ice water bath until thickened. Fold in apple, nuts, and cinnamon. Pour into a lubed 3.5 cup mold and chill until set. Unmold, nosh with matzoh. Delish!

This time around, I used black cherry Jell-O, and while it’s not bad, I recommend sticking with the regular cherry flavor. Black cherry is a little too close to “cough syrup flavored” for my palate, but it does have a nice color, and it holds up well with the apples and wine. The Jellied Charoset is nice and chunky, more like stuff held together with Jell-O than stuff suspended in Jell-O, so more like real food. As I expected, it’s good on matzoh (aptly named “bread of affliction”) which needs all the help it can get.

Apart from my distaste for Manieschewitz wine (indeed, for sweet fortified wines generally), I think it’s important to use a dry red because the Jell-O is so sweet already. The tartness of a dryer wine, surprisingly, gives the Jell-O dish a more sophisticated flavor. Last time, it was Redtree pinot noir. This time, it’s a Beringer 2006 cabernet sauvignon that I happened to have lying around. I know almost nothing about wine, but Julia Child always said not to cook with a wine you wouldn’t drink, and that advice has served me well. Especially since I’m going to have to finish off that cab by myself. Bryan is a teetotaler, and when he cooks with wine it’s with bottles of “red” or “white” that he gets two for $14 at Whole Foods. I sampled the partially used “red” he has stashed in the fridge, and it left the inside of my mouth tasting like a hobo.

I am aware that Jell-O isn’t kosher for Passover, or at any other time. I used it because this is, after all, the New Joy of Jell-O Project, but the serious Passover celebrant could certainly use a kosher gelatin dessert, or an unflavored, plant-based gelling agent (Mr. Google informs me that such things are used in Asian cooking, so if you were looking for an excuse to visit H-Mart, here it is) with Kedem juice and your favorite Israeli wine.

Here’s your go-to if you’re in Minnesota and you get invited to a Passover potluck.

In case anyone’s wondering, I’m not actually Jewish. Bryan is Jewish-ish, descended from a long line of unobservant Jews on his father’s side. (His mother is Catholic.) He was sent to a Hebrew Sunday school for his religious education, and when his parents threw him a big bar mitzvah party, it was at Anthony’s Pier 4 (until a few years ago, a well-known seafood restaurant in Boston), and the main dish was chicken cordon bleu. My family is Catholic, but I never received a religious education and wound up an atheist.

When we were first thinking about getting married, we figured we would go with the Jewish tradition, since that was the only religion either of us had any real feeling for. For a while we attended shabbos services at Harvard Hillel, where even the female Reform rabbi felt that Bryan should go through a formal conversion “to affirm his commitment to the community”. We took remedial Judaism classes at a schul in Lexington, observed the High Holidays (fasting for Yom Kippur was no joke; I wound up with a pounding headache at some point around mid-afternoon), and more-or-less kept kosher for Passover one year. This is particularly challenging if you’re vegetarian and coming at it from the Ashkenazic tradition, which excludes rice, beans, pulses and maize in addition to the wheat, barley, rye, spelt and oats that are prohibited in the Torah. (Ashkenazis were finally allowed by the Rabbinical Assembly to expand their options this year – about 25 years too late for us.) After all of that, we decided that it wasn’t really necessary to go through a formal conversion to be “Passover Jews”, and we were satisfied with being Jewish-ish. In the end, we got married in a civil ceremony performed by a Justice of the Peace who was a friend of Bryan’s father (the first time; the second time, it was Vegas and an Elvis impersonator. Not even kidding about this.)

I’ve never been to a proper seder. The closest I came was a Passover dinner with the family of an old boyfriend. They weren’t particularly observant, and I think they were intimidated by the prospect of explaining the seder to A–‘s shikseh live-in girlfriend. The main things I remember are how nasty the Manieschewitz was (A–‘s family were amused at my reaction) and that they didn’t have a lamb bone for the seder plate, so they used a Milkbone dog biscuit instead. Jellied Charoset doesn’t sound so bad now, does it?