or, Dude, Where’s My Parsley?

Here we enter into the first of our regularly-scheduled savory gelatin dishes. I started with this one because it looked like the least scary one. It’s a simple cucumber salad, with a lemon Jell-O base and sour cream (I think yogurt could work with this as well), seasoned with a little vinegar, onion, parsley and black pepper. It sounds kind of like Indian raita or Greek tzatziki, so it seemed like it wouldn’t be too ridiculous.

It was pretty easy to make, except for one problem – the recipe calls for the cucumbers to be coarsely grated, but we don’t have a box grater, just a microplane grater and a cheese grater. I tried using the microplane briefly, but I ended up with cucumber mush. In retrospect, I probably should have used the grating disk in our Cuisinart, but for some reason I thought that would be too much trouble, and I decided to finely chop the cucumber instead. I admit it, it did occur to me that this might make it difficult to drain enough liquid from the cucumber before adding it to the gelatin, but I went ahead with the chopping anyway.

I drained, I blotted, I blotted some more, and finally, when the cucumber was not obviously weeping, I added it to the seasoned Jell-O and sour cream mixture. I poured it all into a mold lubricated with non-stick cooking spray, and let it chill overnight. 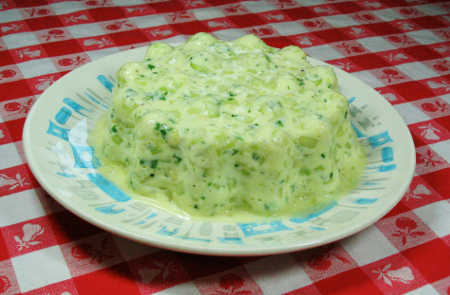 That non-stick cooking spray has not turned out to be the saving grace I was hoping it would be. This dish wouldn’t come out of the mold after the first dip in a hot water bath, and after the second dip it took a good shake to get it out. Once again, there was a little too much melting needed to release the mold, so it ended up sitting in a little pool of liquid gelatin. This time I thought, no problem – the recipe had required only a tablespoon of chopped parsley, so I had most of the bunch left and could use it to garnish the Jell-O for the photo. I opened the fridge, looked in the crisper where I’d put the unused remainder of the bunch, and found only a lot of Polaroid film and a big bag of apples.

Eventually we arrived at the truth of the matter – he had gotten a little over-enthusiastic about cleaning out the fridge that morning and had thrown out the parsley, for some reason assuming that it was old and no good. Argh. 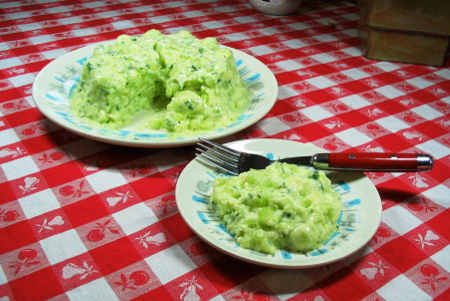 She canna hold much longer, Captain!

The mold appeared to be nice and firm, so after I’d taken a few photos of the whole thing, I thought I’d get some of the mold with a slice of it on a small plate, ready to serve. Cutting into it, I discovered its lack of structural integrity. Nothing resembling a slice was going to come out of this, and as soon as I removed a serving from it, cracks began to develop on top and the whole thing began to slowly collapse. It really would have been better if I’d coarsely grated the cukes as it said in the recipe. Oh well.

I ate the “slice” myself and gave Bryan an amuse-bouche in a custard cup. It wasn’t all that nasty. The savory ingredients do go a long way towards cutting the sweetness of the Jell-O, and it was somewhat reminiscent of other creamy cucumber salads. I found it rather refreshing, but Bryan said he wouldn’t go that far. If I were to make this again, I would probably add more pepper. However, I’m unlikely to make this again. Even though it wasn’t very nasty, it’s been sitting in the refrigerator growing increasingly formless, and we haven’t eaten any more of it since we tasted it. This one, I think, will be garbage disposal food.