On Holiday: Eating My Way Through New Orleans 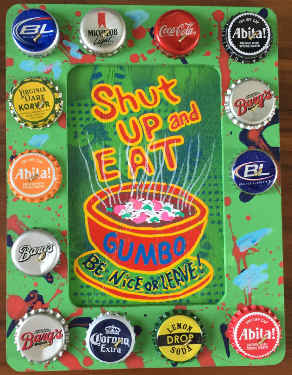 Now that I’m back, I can share the reason that I selected a repost for last week’s blog entry – I was on holiday in New Orleans! While I’m working on a new savory Jell-O and accompanying video for next weekend, I thought I’d share a few highlights.

It had been a long time since either Bryan or I had been to the Big Easy. I spent a couple of days there on my way from San Francisco to NYC in 2000, and Bryan was there for the World Science Fiction Convention in 1988. This time, we went partly because our friend J– had seized upon his daughter’s graduation from Loyola as a happy occasion for a gathering, to make a change from all the funerals.

Our impression of today’s NOLA was mixed. There is a lot about NOLA that’s exceedingly cool (art, music, food, history…) but the drinking culture is kind of overwhelming. We got to experience it even before leaving Boston when a bro’s bachelor party, already underway, boarded the plane and settled into the row behind us. 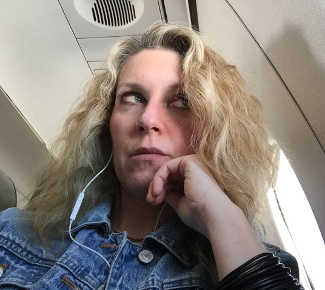 At 35,000 ft – trying to ignore the noisy bachelor party behind me…

We saw many such groups in the French Quarter. The bachelorette parties were particularly easy to identify by their matching tee-shirts, festive headgear, and feather boas. There are few cities in the U.S. where public drinking is legal (of which NOLA and Las Vegas are the best known), and NOLA bars are allowed to stay open 24/7, so it’s a major drinking destination, and people do some major drinking there.

We arrived on a Wednesday evening, hungry for some good Southern cooking. The desk clerk at our B&B, Creole Gardens, pointed us in the direction of Lafayette Square, where a weekly live music show would be winding down, and we’d be able to buy food from street vendors. Bryan didn’t care for the music, so we continued on to Canal Street and, as Bourbon Street was right in front of us, we decided to plunge on into the French Quarter. 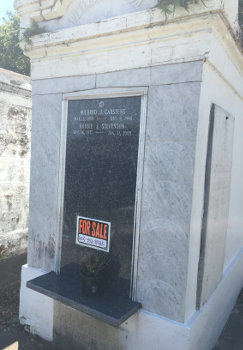 You don’t see this every day!

I’m not going to apologize for saying this: Bourbon Street is awful. It’s noisy, smelly, and vulgar, and within a few blocks Bryan found himself in the clutches of a Shoeshine Man. There’s a scam where a Shoeshine Man bets you that he can tell you where you got your shoes, making it sound like he can psychically discern the state, city, and store where you bought them, but when he finishes winding up his pitch, it turns out that “you got yo’ shoes on the bottoms of yo’ feet”. Ha! And while he’s doing that, if the shoes are leather, he squirts polish on them so that you have no choice but to let him shine them. We had already learned about this scam because a friend of ours fell for it when he was in NOLA a couple of years ago, but Bryan forgot, and got soaked for a cool $20.

We spent far too long wandering pointlessly in the French Quarter before we headed back to the Garden District, to wind up having supper at Seed, a vegan restaurant across the street from Creole Gardens. We agree that this was the best meal we had in NOLA. Creole care for cooking does wonders for vegan cuisine. The food was just beautifully done, excellent flavors, and the restaurant was maybe a little hipstery, but friendly and welcoming and comfortable – a good start to the trip. 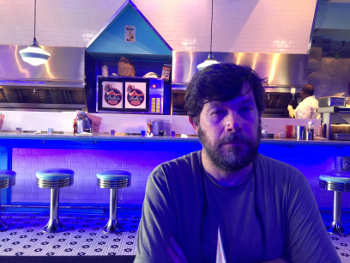 Belle’s Diner, where the ambiance can’t be beat. The food, however…

We had most of our breakfasts at Creole Gardens, and they were excellent. Barbara’s grits and biscuits are top-notch. On Friday and Saturday morning we weren’t able to get up in time for the B&B breakfast, so we ventured out to the neighborhood, hitting the Trolley Stop Café (notable for its dark-colored coffee cups that made pouring difficult for our waitress) and the St. Charles Tavern (notable for being nearly empty late Saturday morning, although the food was good).

Over the course of the six days we were there, the quality of the food was surprisingly inconsistent. An early lunch on Thursday at the Café Fleur de Lis (I had gumbo, Bryan had a shrimp p’ boy) was very good, but that evening we found ourselves part of a group of 13 with no dinner reservations, and we ended up at the Café Pontalba, which deserves props for accommodating us quickly, but alas not for the food. The Spicy Green Beans were a serious fail. We fared much better on Friday with a late lunch with friends at the Gumbo Shop (which I remembered fondly from my last visit to NOLA – lovely pecan pie) and a very, very late supper with them at the 24-hour Daisy Duke’s on Chartres Street. Eating a big bowl of gumbo and having a long, punchy conversation about vampires, zombies and ghosts with our friends’ 12-year-old daughter and 16-year-old son was one of the highlights of the trip. 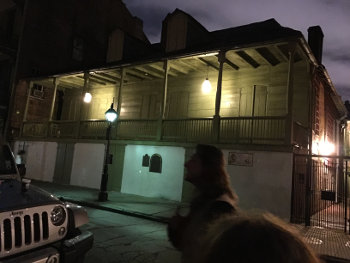 Friday turned into such a late night because J– had organized a “ghost and mystery tour” for the party guests with Jonathan Weiss, the New Orleans Ghost Tour Guide to the Stars, as described by Key and Peele on Jimmy Kimmel’s show while promoting their film Keanu. Jonathan is a charismatic and skilled storyteller (though he could’ve skipped Brangelina’s house). Locations on the tour included the house of Madame Lalaurie (inspiration for “American Horror Story: Coven”), Lafitte’s Blacksmith Shop, Madame John’s Legacy, and the Old Ursuline Convent. The history lesson were interesting, but the upshot seemed to be that anyplace where someone has died might be haunted. Actually, it’s not hard to believe that New Orleans is haunted, and I expect that the complete absence of ghosts on the tour might have been down to the masses of tourists drinking up a storm everywhere we went. If I was a ghost, I would have stayed holed up in an attic, too.

While we got sucked into the French Quarter far too often, we did manage to spend some time in the Garden District. The graduation party was at a house J– had rented, and that turned out to be a nice, relaxing time hanging out with old friends and meeting cool new people. 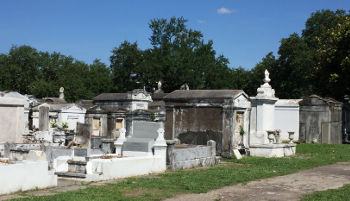 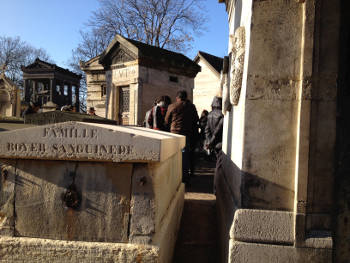 One day we visited Lafayette Cemetery #1, where some of Interview with a Vampire was filmed. Bryan was disappointed at the lack of spookiness, though expecting a cemetery to be spooky at noon might be asking a lot. He’d learned that part of the reason the tombs are above ground (aside from the well-known high water table) is because the older cemeteries in NOLA are modeled on Père Lachaise Cemetery in Paris, where many of the graves have small chapels built above them. The graves in Lafayette #1 are more modest than most at Père Lachaise, and more uniform. Lafayette #1 is also small area-wise, because those tombs are often shared by many family members.

We followed up Lafayette #1 with lunch at  the St. James Cheese Company, and dessert at Creole Creamery, which has exotic flavors to rival anything we might find at Toscanini’s here at home. 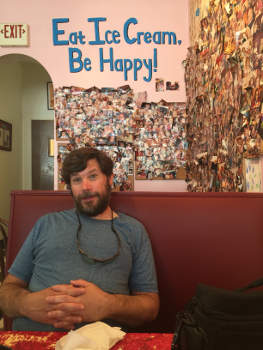 Treating ourselves at the Creole Creamery in the Garden District

One of the things I love about the American South is the folk art, and we managed to see a good bit of that while we were there. We visited the Ogden Museum, just down the street from Creole Gardens, and browsed the galleries on Royal Street looking for the work of Dr. Bob (which I’ve loved since I picked up one of his pieces in Memphis almost 20 years ago). We went to the old U.S. Mint over on Esplanade Street, where the ground floor houses an exhibit on the history of the mint (including why it’s not a working mint anymore), and the second floor has art exhibits – at the time we visited, one gallery had an exhibit of Southern outsider art, and another had a really good exhibit on native son Louis Armstrong. We even made a visit to Madame John’s Legacy in the daytime, while it was open to the public (and free!) It seemed even less haunted in the middle of the day, but we like antique houses (we used to own one) and there was a nice exhibit on Newcomb Pottery (I have a weakness for the Arts and Crafts movement). 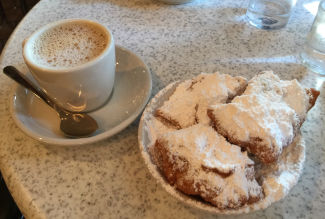 And yes, we did finally manage to round out our trip to New Orleans with the obligatory visit to the Café du Monde for beignets and café au lait.