Yeah, it’s Jell-O fruitcake… (And yes, the person who took this is a foot taller than I am, which is not saying much…)

So a while ago I was googling Jell-O (don’t ask) and stumbled upon a factoid – July 12 is National Eat Your Jell-O Day. I noted it in my calendar and resumed googling. (Really, don’t ask.)

Procrastinator that I am, I left doing something about it until the last possible moment, and yesterday after work as I researched National Eat Your Jell-O Day, I discovered that the reason it’s on July 12 is that July 12 is Bill Cosby’s birthday.

I think we’d all rather not make that association anymore. Still, if you google “National Eat Your Jell-O Day”, it’s in all the calendars for July 12, and we can’t just go around changing all the calendars on the internet now, can we?

I say we just re-claim this holiday, treat the day as though it were based on, say, the Mayan calendar. (Let’s not make it a lunar holiday, though. Then it’ll keep moving around and we’ll never be able to keep track of it.) Let’s make it all about the Jell-O, because that’s what’s important.

So in honor of National Eat Your Jell-O Day, I decided to put up a little New Joy of Jell-O retrospective. Jell-O has changed my life in some weird and interesting ways.

For those of you who haven’t read the “About the Project” page, I started this blog on a dare. I had been grumbling at length to Bryan about Julie Powell’s success with her Julie/Julia Project blog after we saw the movie Julie and Julia. (Okay, I admit it, I was jealous.) Thinking he’d get me to shut up about it, when we got home he said I should start my own though-cooking blog, and he pulled The New Joys of Jell-O from our bookcase full of cookbooks and handed it to me.

Salmon DIll Mousse – so bad, even the cat wouldn’t eat it

I don’t think he really thought I’d do it. Considering that by that point he’d known me for over twenty years and married me twice, you’d think he would’ve known better.

I have absolutely no idea what this is. Looks purty, though, don’t it?

I mean, it didn’t seem like it would be that hard. Depending on how you count, there’s a little over a hundred recipes in the book. And it’s Jell-O, ferchrissakes! Cafeteria food! Sick-day food! It’s the easiest bloody dessert to make in the world after cut-up fruit!

It turned out that two Jell-O dishes per week, plus the photography and writing (in addition to work, fitness activities, and other life things) was a bit much. Strange as it sounds, I got burnt out on Jell-O.

Even stranger, though, was the way that the Project haunted me. For four years it haunted me, until some friends convinced me to restart it.

Even with a proper editorial calendar and careful pacing, it hasn’t been totally smooth going, but I finally feel like I’m on track to see this thing through to the end. I like that the New Joy of Jell-O Project gives my life a sort of weird, random purpose, and it feels good to be writing regularly, getting a little creative, and stretching a bit into visual arts.

I think I’m even getting to like Jell-O. I’m kind of looking forward to the next one, actually… 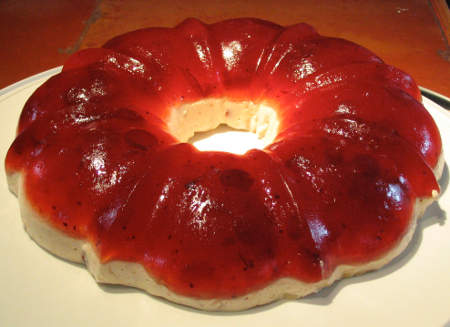