Okay, let me just start by saying that I’m feeling a little annoyed about this one. Not because it was so difficult – quite the opposite, in fact. After the last couple of weeks, it would have been kind of therapeutic to work on a recipe that’s a little more involved than this, something requiring a little more focus, to take me to my Zen happy place.

I paid more than usual attention to the Republican and Democratic conventions, and came out of it feeling as though I’d been worked over with a bad-cop-good-cop routine. In Jell-O terms, the Republican convention was Molded Ham and Egg Salad, and the Democratic convention was a rainbow Jell-O mold. The Republican convention was so dismal in tone and so badly run that it made the Democratic convention look almost too good by comparison. Tim Kaine’s goofy sweetness was a welcome change from, say, Chris Christie’s kangaroo court routine, or Ben Carson’s loopy speech in which he obliquely accused Hillary Clinton of Satan worship. I found Bill Clinton’s affectionate account of his life with Hillary touching even though it was hard to square with my memory of the Monica Lewinsky thing. I’m not usually susceptible to American patriotic optimism, but after four days of the Republicans shouting at us that we’re all doomed and Donald Trump alone can save us, it was a relief. I felt like Winston Smith having finally surrendered to Big Brother. And, to be clear, I don’t mean that in a good way.

I wish I could feel more excited about the fact that a woman has been nominated as a candidate for president of the United States. It’s historic, for us, but in this we’re behind a lot of other countries, from Great Britain to Pakistan. Also, Clinton hasn’t won yet. I’m afraid that if she does, she (and we) will have to endure sexism on a similar level to the racism we’ve seen aimed at President Obama for the last seven and a half years. On the other hand, the prospect of a Trump presidency is terrifying. Either way, the next four and a half years are going to be rough. 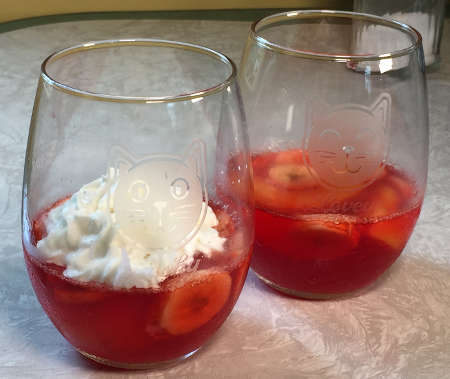 And then there’s Peach-Banana Dessert, damn it – just another fruit-suspended-in-Jell-O. The ingredients are: one 3-ounce package strawberry Jell-O, one sliced banana, and one 1-pound can sliced peaches. As usual, the peaches presented a problem. One-pound cans now weigh 15.25 ounces. Sigh.

The preparation, quite typically, involves dissolving the powdered gelatin in a cup of boiling water and adding the syrup from the peaches plus water to equal a cup of cold liquid. The resulting liquid gelatin was still quite hot, but the directions say to pour it into dessert dishes and then add the fruit. I read this, and looked at my glass dessert dishes, and wondered if thermal shock was not a thing in 1974. Exploding glasses would not have made this more fun, so I thickened the gelatin over an ice water bath (also nice because the weather was hot and humid when I did this), stirred in the banana slices, put the gelatin into my kittykat wine glasses (a gift from my friend K–), and added the peaches. Voila!

This was definitely improved by the addition of whipped cream, but it was fine as is. The canned peaches turned out to be surprisingly decent (Del Monte brand, in case you’re curious), especially compared to the frozen peaches I used in Jellied Peach Melba. Peaches are difficult because it seems like the only way they’re really any good is if they’re fresh in season. To hear some people tell it, the only places you can get good peaches are Georgia and South Carolina. (Which state has the better peaches in the subject of religious debate.) The town where I grew up in western Massachusetts is home to a peach orchard or two, and I remember having good fresh peaches as a kid, so I know what I’m missing now.

The thing with fruit-in-Jell-O is that it always seems like a dessert for sick, elderly, or mentally ill people. It’s kind of funny that I think that now, because I remember as a kid liking Jell-O with canned fruit cocktail in it. There was something fascinating about canned fruit cocktail, that weird thing that happened to the grapes in the canning process, and the cherries actually seemed edible. Yet another reason to feel good about getting older…