It seems like I’ve been spending a lot of time on Memory Lane lately. It might be a function of the Big Five-Oh looming in the not-too-distant future, or it may be because I’m working my way through A Square Meal: A Culinary History of the Great Depression (which is an interesting, if not exactly uplifting, read), or it may be because I’ve been spending so much time listening to my Galaxy News Radio channel and thinking about the evolution of American popular music, but I feel like I’m looking back a lot – not wistfully, but trying to get a better sense of my place on the continuum. For a long time I’ve had this notion that life is a puzzle that makes more sense as you find and slot in the pieces, and the past is a good place to go looking for puzzle pieces.

Last Sunday morning I found this tweet in my timeline:

The person Steve Martin was retweeting has apparently just discovered Martin’s old standup material, which is great (oh, to be able to hear “King Tut” for the first time again!), but it looks like he jumped to the conclusion that because it’s new to him, it must have been forgotten by everyone else. Mentioning Martin in his tweet really put the icing on this faux pas. Maybe he thought he was doing him a favor.

Jay seems to lack a sense of himself in relation to history. Perhaps, like a lot of young people today, he thinks that the past is irrelevant to him because things have changed so much, so fast. It didn’t occur to him that there’s a generation or two before him who remember Steve Martin’s earlier work and consider it hugely influential, even (as many replies to his tweet noted) legendary – and who may be among Martin’s 7.7 million Twitter followers. In this internet age, it would have been easy enough to discover the foundation of Martin’s enduring success (which certainly doesn’t indicate an “underrated” early career), but Jay’s reference point was himself, and he mistakenly thought that was sufficient.

But enough of this “get off of my lawn” stuff… 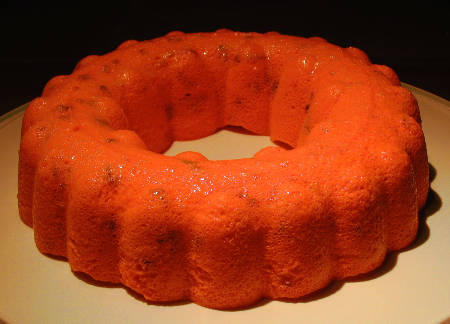 Honey Pecan Bavarian, back in the day… 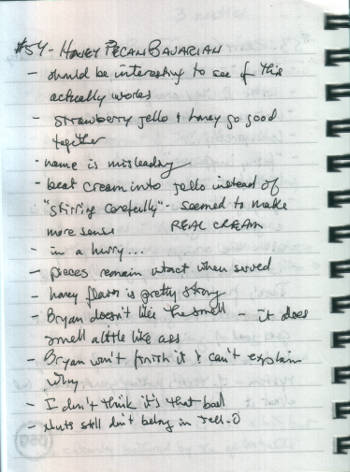 Going by my notes, I was psyched to make this one because it contains “REAL CREAM”, which I can imagine would have seemed like a huge relief after recipes involving Cool Whip, Dream Whip, and mayonnaise. The Jell-O is strawberry flavor, which apparently goes well with honey, although in hindsight I am dubious. I indicated that the honey flavor “is pretty strong”, so I guess you have to like honey if you’re going to make this one.

A tip for anyone who decides to try to make this – the recipe says to “stir carefully” when adding the cream to the thickened gelatin; I found that beating the cream into the gelatin worked better. However, careful stirring is probably the way to go with the pecans. Pecans? Yes, though I remarked that “nuts still don’t belong in Jell-O”.

The pieces remained intact when I served them, which is always a good feature in a Jell-O mold. Bryan didn’t like the smell, and I concurred, noting that “it does smell a little like ass”. He couldn’t finish his portion, and couldn’t explain why (which may not mean that much, really), but I didn’t think it was that bad.

Still, I’m just as glad I didn’t have to make this again. I may have forgotten it, but at least I wasn’t doomed to repeat it.