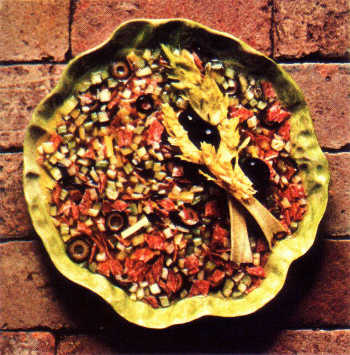 I hate to sound like I’m trying to make excuses, so please be assured that I’m telling you this by way of explanation. I’m suffering from election fever, and not in a good way. I’ve been spending more and more time paying attention to the U.S. presidential campaign, partly because I plan to vote for Clinton and I’m looking for positive reasons to do that, and partly because I don’t just want to see Trump lose the election, I want to see him crash and burn, and I want a front-row seat when that happens. (I generally try not to get too political here, but I trust no one who’s been following NJoJ is surprised by this.) In practical terms, this means that I’ve been slacking in other areas, like blogging, gym-ing, and sleeping.

Even so, I feel like the there’s some serendipity in the way the timing has worked out on this, because just in time for Indigenous Peoples Day (as it’s now officially known here in Nerdvana) I get to crap all over Italian cuisine with a little dish called Antipasto Salad. 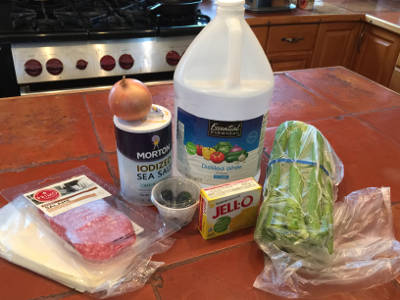 Antipasto Salad is a savory Jell-O recipe with an unlikely assortment of ingredients, including salami, Swiss cheese, celery, raw onion, and olives. That big jug of vinegar you see in the photo is something I normally use when I’m washing a load of dishtowels to wash out that kitchen funk, but every once in a great while it gets pressed into service to mask the sweetness of Jell-O. Or to try, at least. 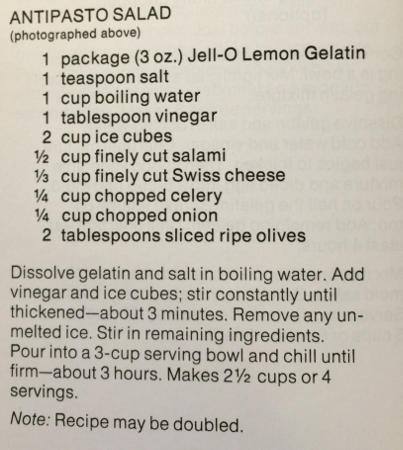 “Recipe may be doubled” – but why?

I made one serious mistake in preparing this, which was to ask Bryan to pick up the ingredients for me. After a cursory reading of the recipe, he bought sliced salami and sliced Swiss cheese, and decided that the six-week-old leftover celery from Garden Soufflé Salad would be okay to use in this recipe. (Rest assured, this has since been discarded.) I had him get me some fresh celery, but decided just to work with the sliced meat and cheese.

(So we’re clear, I don’t find strategic incompetence endearing. I understand that sometimes it’s necessary to manage expectations, but perhaps it’s also best not to allow expectations to get too low…)

You might recall that Bryan and I keep a mostly vegetarian diet (we also eat fish), so I hadn’t eaten salami in possibly more than 30 years. Maybe it was the brand that Bryan picked out, but when I tried it, I though to myself, “I’m ‘cheating’ for this?” I found it bland, and fatty. Maybe a good spicy Italian salami would have tasted better, but Bryan (rightly, I think) judged that it wouldn’t be worth using something like that in a Jell-O dish.

Since I couldn’t really “finely cut” the sliced meat and cheese, I cut it into strips, figuring that I’d get the Jell-O nice and thick before adding the solid ingredients so that they wouldn’t just float to the top. The choice to buy a small quantity of olives from the salad bar was smart (because neither of us particularly likes olives), but I have to gripe a little, because slicing them was a pain in the neck. As I’ve done with past savory Jell-O salads, I prepared more of the solid ingredients than indicated in the recipe, trying for a more appetizing proportion of solids to jelly. Once again, I eschewed the ice cube quick-thickening method in favor of an ice water bath, and when the Jell-O was thick enough, I stirred in the other ingredients, put the lot in a decorative glass bowl, and put it in the fridge to firm up. 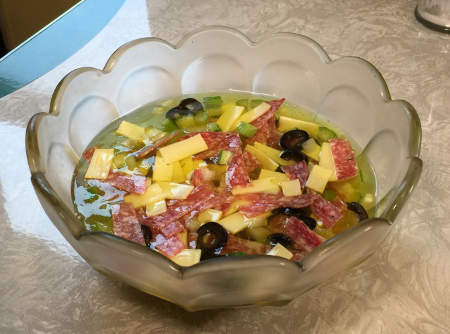 Well, as it turns out, I picked the wrong recipe to spare you all from the guilt of not watching another of my cringe-worthy videos. Finally, I’d hit upon one that was truly foul. It didn’t even look nice, and it smelled bad. When I got it out to taste it, Bryan ran upstairs to hide.

It tasted pretty bad, too. Despite the vinegar, the Jell-O was too sweet, and even though I’d added more meat, cheese and veggies, the solids-to-jelly ratio was still too low. Again I found myself wishing that I’d at least sautéed the onions a little in butter, because raw onions in Jell-O are just nasty.

Since I was bailing on doing the video, I decided to take some pictures instead. Here’s my reaction to Antipasto Salad in a series of photos:

Sure, I can dish it out…

But can I take it? 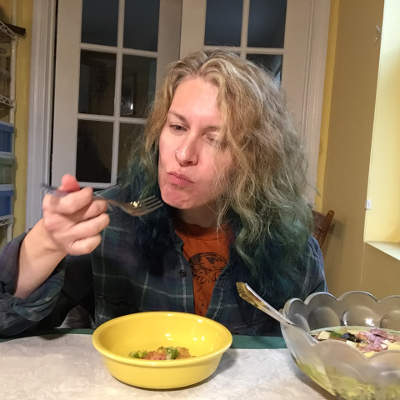 What is it I’m tasting here? 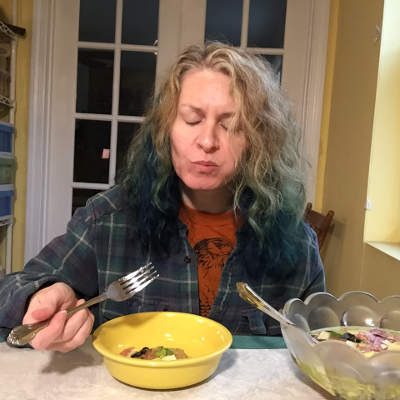 This salami is not good… 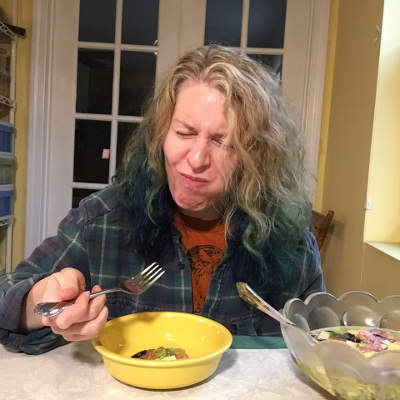 It just gets worse the more I chew…

Why do I do this to myself?

I hope somebody appreciates this…

When Bryan ventured back downstairs, I made him try a bite. His opinion of the dish was expressed mainly in a series of short grunts.

We weren’t even able to finish off a small portion between the two of us. Most of this became garbage disposal food. A donation is being made to Action Against Hunger. I am truly sorry for this one. 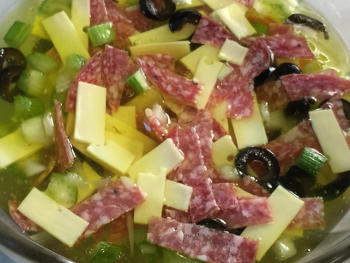