Well, here we are back on the increasingly cracked and weedy Memory Lane. I have no recollection of this one whatsoever, which is hardly surprising considering that I made it almost seven years ago. So much water under the bridge, and, to be honest, there’s so much going on in the here-and-now that my brain doesn’t have a lot of room for nostalgia these days.

So I’m working off of my old notes, which seem so uninformative now.

This is one of those not-awful savory recipes, vegetables suspended in Jell-O instead of fruit. It’s seasoned with vinegar, salt and pepper, and I’m guessing that the amounts were adequate to counteract the sweetness of the Jell-O, because I didn’t remark that it was too sweet – though I did note that it “[wasn’t] Molded Tomato Relish, but definitely a WTF kind of thing”, so maybe it was still early enough in the Project that I didn’t quite know how to approach the savory ones.

The vegetables involved are onion (grated), cauliflower, and pimento, and it looks like this one is another where I made the mistake of asking Bryan to pick up ingredients for me. Like a lot of people our age, he only knew of pimentos as the red things that sometimes appear stuffed into green olives, and he didn’t realize that you could buy them on their own in jars, so he bought me a red bell pepper instead, and that’s what I ended up using. Appearance-wise, that was probably close enough, but I bet that using pickled pimentos would have helped to further mask the sweetness of the Jell-O. As with Garden Soufflé Salad, I found the cauliflower to have an odd texture in the gelatin, and it tasted weird, too. I thought this dish would be better with celery Jell-O.

The recipe suggests serving this with mayonnaise or French dressing if desired. No, I do not desire. 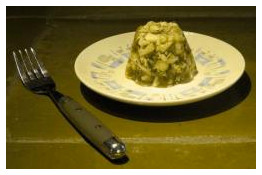 One thing I did like about Sequin Salad was the appearance, which is so often Jell-O’s strong suit. However, it did not look appetizing to Bryan, who saw it as primarily “pale beige” because he’s red-green colorblind. I’ve known this about him for almost as long as I’ve known him, and with image-filtering technology I can get some idea of how the world looks to him. I suspect that the filtered image here is more yellow-brown than it would look to Bryan. He can actually see some red, although he tends to have trouble with the Pepto-pinks (so Jell-Os like Cherry Chiffon probably don’t look that great, either) and depending on the brightness, greens appear to him as yellow, orange, or brown. When he was a kid, he was confused by the expression “The grass is always greener on the other side of the fence” because all the grass looked orange to him.

I guess I should be a little fairer to Bryan, considering that he’s getting even less enjoyment from the Jell-O than I am. Then again, this was his idea, so – nah…