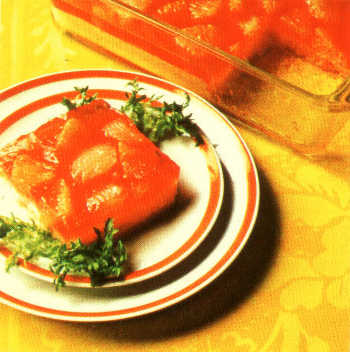 Get your hiking boots on – we’re back to Memory Lane.

Once again, I have no specific memory of this recipe, similar as it is to a few other ginger-ale/orange Jell-O combos. I’ve never cared much for artificial orange flavor, and this election season has given me a downright aversion to that bright orange color. (Shouldn’t an alleged billionaire be able to afford a better grade of fake tan?)

Yes, I’m back to stressing about the election. This year, for the first time, my state is allowing early voting, and it started October 24. Last week (on Hillary Clinton’s birthday), I went and voted at lunchtime, and despite low expectations, I felt a lot better. I’d done what was in my power to do. I tweeted this photo with the message “Suck it, Trump!” The polls were showing Clinton with a solid lead, and it seemed as though a crisis had been averted.

Then last Friday Jason Chaffetz (R-Utah and part-time Eddie Munster impersonator) sent out his misleading tweet about the Comey memo, and we were back in the swamp. The more liberal-leaning media have characterized as “a nothingburger” the FBI’s decision to resume the Clinton email investigation with whatever might be found on Huma Abedin’s computer, and it’s hard to imagine something like this swaying a lot of undecided voters at this point, but polls are showing Clinton’s lead narrowing. Eager as I am at this point to see Election Day come and go, it’s hard to see how things are going to get better as of November 9. Either we end up with a Trump presidency (god forbid) or Clinton wins by a narrow margin and the people who are convinced that “the system is rigged” refuse to accept the election results – and even if no one attempts “a Second Amendment solution”, Republicans in the legislature will most likely continue the obstructionism they’ve been practicing under President Obama.

The longer I look at this, the funnier it gets….

I don’t think I’ve ever had a time when I so badly wanted to just be sedated until it’s all over, and I’m getting a little desperate in my attempts to keep my spirits up. I just discovered the face-altering feature in Snapchat, and I’ve been cracking myself up taking selfies of me as a bat, a drag queen, a pug dog. Face swap with random photos on my phone is also a hoot, though Bryan really doesn’t like the one I did with his picture. I think he’s getting a little worried about me.

At least I’m still carrying on with the Jell-O.

Although I have no memory of Zesty Ginger-Fruit Salad, I do still have notes. It was number 53, just a few recipes before the original Project came to a screeching halt. I doubt this one was one of the last straws, though.

This was a pretty simple one, though apparently not as quick to make as I was expecting, just orange Jell-O made with ginger ale, and grapefruit and orange pieces. I was dubious that this Jell-O salad would be “zesty”, and indeed I wound up deeming it “fairly inoffensive”, a “breakfast Jell-O”. The grapefruit cut the sweetness of the Jell-O (always a good thing), but the orange pieces were too pithy. It got me thinking about online acquaintance* and loyal reader Jack, who lives in California and is fortunate to have a number of citrus trees on his property. This would have been so much better with fresh citrus.

This weekend I have a relatively pleasant Jell-O recipe to make. It’s good to have things to look forward to…

* I hope he’s okay with this qualification. I’ve never met him in person.