“The War on Saturnalia”, by Me

My editorial calendar gave me a “free week” before another savory Jell-O this weekend, and I happened to have some extra free time because MIT gave us a relatively generous holiday schedule, an extra day each for Christmas and New Years. Woo! (I’m a little bitter because Harvard gives Bryan the whole week off. Yes, I’m a churl. We’re both really lucky.) Anyway, I figured I might as well fire up my “Holidazed” playlist in iTunes and do a  holiday post.

To tell the truth, I’ve been procrastinating badly since I started this post. I even blew away a whole afternoon wading in the swamp at the heart of YouTube where Millennials with millions of followers create drama with each other to get more followers, which gets them money somehow. I was simultaneously appalled and baffled. It probably would have been a more productive afternoon if I had hit myself over the head repeatedly with a blunt object. The point is, I did it to avoid working on this post, because I am not into the holidays, to say the least. 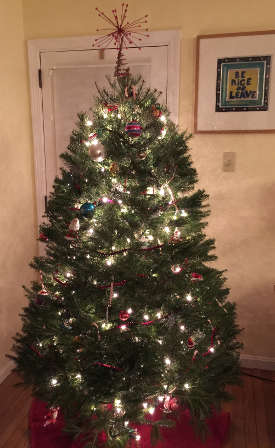 It’s not that I dislike the holiday season. I’m not into the widely decried (and yet widely indulged) crass commercialism, and as an atheist, Christmas has no spiritual meaning for me, but I dig all the pagan trappings, which make a lot of practical sense to me. The evergreens and lights and decorations really help in getting through the darkest part of the year here in the northern hemisphere. (Summertime Christmas in Australia must be so weird…)

But I’m from what used to be called “a broken home”, and it was broken well before my parents officially separated when I was 14, so my holiday memories are not all that merry and bright.

When you’re a little kid and you don’t know any better, whatever is happening to you at the time seems normal, but with time and perspective, some of our holiday practices don’t seem so normal. For instance, when I was maybe five years old, my father got a super-8 movie camera (perhaps because some dumb kid, probably not me, put Vaseline in the still camera) and from then on he was the Cecil B. DeMille of our family holidays. We kids couldn’t come downstairs, not even to peep through the living room doorway at the tree and whatever was under it, until Mr. DeMille had taken out the camera and the bright light, plugged in the light, and got himself situated on the landing. Then, on cue, we were allowed to pad down to the bottom of the stairs in our footie pajamas – where we had to stand waiting while Mr. DeMille moved the camera setup to the far side of the living room, from which he could film us pouncing on our presents. The camera work probably took longer than the resulting three-minute silent holiday film reels, and it’s a good thing they were silent, because there was usually a fair amount of scolding and crying during our childish orgy of greed and disappointment – but they mostly looked festive, and that was what counted.

Not long after the introduction of the movie camera, I think between the second-to-last and last children, Santa gave up on wrapping our presents. Maybe he’d needed to let some elves go during the economically-depressed 1970s and had to cut corners. Instead, he arranged the gifts in piles, and our stockings (fleecy red ones with our names written in glue-and-gold-glitter on the fleecy white cuffs, lumpy with the old-fashioned stuffing of oranges, nuts and chocolates) were placed on top to indicate which pile was meant for which child. I should note here that my mother did not work outside the home, so maybe if Santa wasn’t so proud he might have asked her to help out.

When I was a kid, I thought my uncles were funny, but now I suspect that they may have helped shape my sarcastic and rather dark sense of humor. They were all military veterans, and some had served overseas in the Vietnam War. The grownups did what they could to shelter us from the damage that the war had done to the extended family (in part because my family mostly supported the war) and I still get a kick out of something that my uncles did that annoyed my grandmother. She had a ceramic NOEL set similar to the one in the photo above, and my uncles would rearrange the letters when she wasn’t looking. LEON was the favorite, but sometimes it would be LONE, or ELON. I have a couple of these sets now, which I call my LEONs, that are part of the holiday decor at Freak Mountain. This year, Bryan rearranged the letters to spell “LENO”, and the tradition carries on…

After my parents separated, the holidays started to fall apart in various ways, and not only because my siblings and I were getting too old to wear footie pajamas. At the same time, cracks were showing in the façade of the extended family, and the holidays just got sadder and sadder. That might be partly why, when I went off to college, I started dating Jewish guys. That kind of let me off the hook for celebrating Christmas if I didn’t feel like it.

My first holiday season living on my own, my boyfriend A– and I had a Winter Solstice party, and we continued to do that when we moved to Fandom House. Our Solstice parties were legendary. Friends would come up from New York and DC and crash on our floors or at the homes of other local friends, and a party would last a weekend. Of course, that couldn’t last. “The Original Series” of Fandom House moved out, and we got older and more responsible and less able to spare an entire weekend to party. Bryan and I moved into an apartment on our own, and the holidays were (and still are) awkward because Bryan was raised to think of himself as a Jew. We’ve had Chanukah bushes and solstice trees and no decorations at all, but have never settled on our own holiday routine, so I don’t really feel like the holidays are mine. 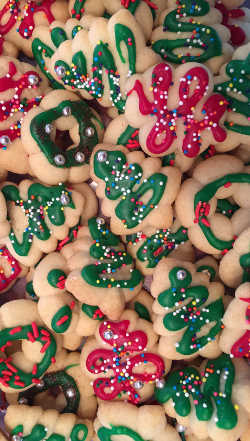 It sounds stupid, but what I miss most are the cookies. One of my aunts did a ton of baking at the holidays, so there were all kinds of beautiful cookies – spritz cookies, chocolate and vanilla pinwheels, linzer tarts, snowball cookies, gingerbread cookies, and more that I can’t remember, but damn, being an adult sucks when you can’t have all the cookies you want. I don’t know how my aunt did it, because she also worked outside the home as some sort of medical technician and had a child. Even if I had a way to make sure Bryan and I wouldn’t eat all those cookies ourselves, I’d never have time to do all that baking. So I compromise by baking a batch of spritz cookies (which I love because they’re simple, buttery, and not too sweet), and I bring some to the Lab, and Bryan and I eat too many, but hey, it’s only once a year, right?

And now, as I finish writing this post, it’s New Year’s Eve, and I’m relieved that the holiday season is almost over. I have a weird Jell-O recipe firming up in the fridge, and stuff lined up to look forward to in 2017. I don’t think I’ll get all the way through The New Joys of Jell-O by the end of the year, but I’ll be pretty close. Meanwhile, I’ve got something very exciting planned for my 50th birthday, and then in April I’ll be doing a weekend crash course in becoming a rock star – so stay tuned!

If anyone’s reading this, I hope you had a joyous, or at least peaceful holiday season, and that you have something to look forward to in the coming year.