Well, we’re back to that weedy, rutted path known as Memory Lane.

I do have a vague recollection of Topaz Parfait, because it’s one of those recipes where the flavor of the Jell-O clashes rather badly with the additional ingredients. Appearing in the third chapter of The New Joys of Jell-O (“Bring on the Super Desserts”), Topaz Parfait gives the cook a chance to use the cubed gelatin technique while going on a little flavor adventure – and I mean “adventure” in the “bad planning” sense.

The adventure starts with a cup of strong coffee. Now, making coffee at Freak Mountain is always a bit of a production, because Bryan only buys whole beans, which have to be weighed on the kitchen scale and ground in the fancy-pants Italian burr grinder, to the right degree of coarseness or fineness, just before brewing. Our three main coffee-making options are French press, Chemex (I think we might have a reusable cotton filter somewhere), or  a basic pour-over dripping into a thermal carafe. For this recipe, I used instant espresso.

The coffee is heated to boiling (always a bad idea with coffee), and lemon Jell-O and sugar are dissolved in it. Then cold water and brandy are added. I think you see where this is going. The Jell-O is poured into a square pan to chill until firm so that it can be cut into cubes, which are then layered with Dream Whip that’s been prepared with the addition of a little brown sugar and brandy. The Dream Whip, at least, is improved by this treatment.

So many thoughts about Topaz Parfait…

Apparently the first major problem with this recipe was the smell. I don’t remember this specifically, but I can believe it. Even the nice Jell-O recipes can make the fridge smell a little funky. According to my notes, it “[made] the fridge smell like someone spilled a bottle of stout and didn’t clean it up”. I do like stout, but for drinking, not as an air freshener. Of course, the real culprit here was the brandy, which is something I don’t really like anyway, but the combination of brandy, coffee, and lemon Jell-O just doesn’t work well.

Since I’m at least a somewhat nice person, I let Bryan have the smaller dish of Topaz Parfait and took the tall one for myself. I finished it off, but only because Bryan said I couldn’t and I’m a sucker for a thrown-down gauntlet. It seems the aftertaste was quite something, and called for a palate cleanser of miniature marshmallows. We gave it three nasties, which puts it on the same level as Winter Fruit Mold (a/k/a Jell-O Fruitcake), Salmon Dill Mousse and Spanish Tuna Salad.

The thing about this recipe, and a couple of others, is that it made me want to do a proper coffee jelly, and I keep meaning to do it but haven’t gotten around to it yet. What I’d really like to do is a jelly version of Thai iced coffee, which I think would be really good, but I haven’t been able to find a satisfactory recipe for Thai coffee. I’d like to make it replicating the sweetened condensed milk that floats on top of the coffee at first and slowly swirls down into the coffee, combining with it in a sort of Brownian motion that’s intriguing to watch if you can resist drinking the coffee long enough. 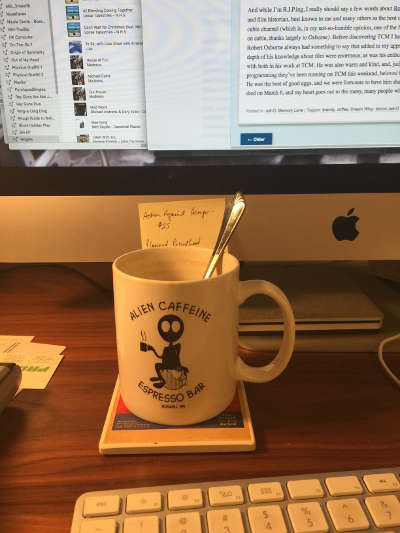 A few months ago, after hunting around a bit at our local H-Mart, I found something called “instant Thai coffee drink” that I thought might be just the ticket, but it turned out to be instant coffee with sugar and, I’m guessing, powdered non-dairy creamer. (I’m enjoying some right now in my “Alien Caffeine Espresso Bar” souvenir mug from the UFO Museum in Roswell, New Mexico.) Back to the drawing board, I guess.

So we’ve got some new recipes coming up for the next couple of weeks, and then I’m going to be taking a weekend off to participate in the Ladies Rock Camp Boston fundraiser for the Girls Rock Campaign Boston. It’s basically a weekend-long rock bootcamp culminating in a showcase, possibly at a very cool local club – and I won’t lie, I’m nervous as hell about it. I’ve scarcely picked up a guitar in years, but probably someone will stick an open-tuned guitar in my hands and tell me where on the fretboard I should be holding down all the strings with my index finger to play a song. I’ve heard some distortion pedal lessons might be involved. I guess if worse comes to worst they can always take me off of guitar and put me on cowbell.

I need to start getting into a more musical mindset. Maybe I should be listening to more Chuck Berry… (R.I.P.)

And while I’m R.I.P.ing, I really should say a few words about Robert Osborne. He was a writer and film historian, best known to me and many others as the host of the Turner Classic Movies cable channel (which is, in my not-so-humble opinion, one of the few worthwhile channels left on cable, thanks largely to Osborne). Before discovering TCM I had loved classic film, but Robert Osborne always had something to say that added to my appreciation. The breadth and depth of his knowledge about film were enormous, as was his enthusiasm, and he was generous with both in his work at TCM. He was also warm and kind, and, judging by the tribute programming they’ve been running on TCM this weekend, beloved by everyone who met him. He was the best of good eggs, and we were fortunate to have him share the planet with us. He died on March 6, and my heart goes out to the many, many people who share my sorrow.