For some reason, WordPress won’t let me use strikethrough formatting in the title, so let me just note that, for the purposes of the Project, the official title of this recipe is Quick Fruit Salad.

This one is definitely an Orange Boycott, given that the base Jell-O is orange, and the “salad” part is mostly orange sections. This meant that I had to get kind of creative with the substitutions.

I thought that it could be fun to go with one of the more interesting Jell-O flavors – in my stash I have boxes of flavors like mango and “Melon Fusion”, but I decided that after the narrow passage of Trumpcare in the U.S. House of Representatives this week, I wanted to get as far from orange as possible. That meant Berry Blue. Blue is, of course, the complementary (or opposite) color to orange on the color wheel you learned in elementary school.

I had to put more thought into what I was going to use in place of the orange sections, and I settled on a bit of an assortment, like a standard, non-gelatinous fruit salad. At the range of restaurants we tend to frequent, fruit salad is almost always bits of cantaloupe, honeydew, strawberries, grapes, and maybe banana slices and/or blueberries, so I thought I’d try for something like that. Ruling out cantaloupe on account of the color, and bananas on account of their maddening tendency to clump together, I finally settled on honeydew and a strawberry and blueberry mix from the prepared-fruit section at the supermarket.

The recipe also calls for halved green grapes, and that was the key point where I did follow instructions. This part was kind of annoying, cutting the grapes in half. It reminded me of making Frosted Fresh Grapes, and I decided that, really, any preparation of grapes beyond washing them and pulling them off of the stems is a waste of time. 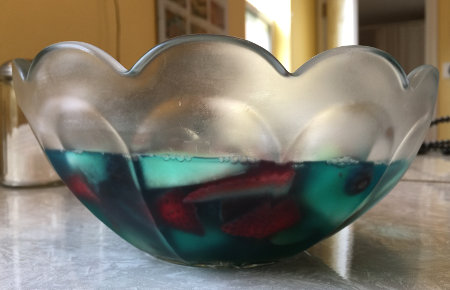 The preparation of Quick Fruit Salad was mostly straightforward. The recipe includes the addition of a dash of salt and two teaspoons of lemon juice to the gelatin, and I went ahead and did that. This is supposed to be quick-thickened by the addition of ice in place of the cold water, but I guess the temperature in the kitchen wasn’t quite cool enough yesterday because, once again, this technique didn’t quite work, and I ended up thickening it over an ice-water bath. Once that was done, I added the fruit, put it in a pretty serving bowl, and was struck, as I put it into the fridge to chill, by the aquamarine color of the Berry Blue Jell-O and how it made me think of a fish bowl. I started wishing that I’d cut the honeydew slices into little fish shapes, and…. Nah. Life’s too short.

For me, this turned out to be a perfectly nice dessert. I didn’t measure out the fruit and probably added more than the recipe called for, but this just meant that it seemed more healthful. The grape halves sank to the bottom, but that wasn’t a big deal once I’d dished out a portion. The Berry Blue flavor was better than I remembered, but maybe the addition of the salt and lemon juice had something to do with that. It reminded me of Smarties (the American kind, not the British kind) or Sweet Tarts. I found that I really liked the color, too. It reminded me of summer, which is taking its own sweet time coming around this year. Also, it kind of matched my hair’s current “accent” color, as my trainer pointed out when I was telling him about this earlier today, which is why I included a somewhat rare photo of myself tasting the Jell-O. However, to my colorblind spouse, Berry Blue Jell-O is a weird sort of blue-gray. “It doesn’t look like food!” he protested. I’ll be eating the lion’s share of this one.

The apron I’m wearing in that photo was sent up to me this past week by R–, a former student/researcher in our lab who’s now working on his Ph.D. at Yale. The shiny red cerebrum reminded him of my brain-shaped Jell-O mold, and he couldn’t resist the kind gesture, for which I’m grateful.

It’s been kind of a gloomy week, between the weather and the GOP trying to kill and/or subjugate us 99%ers, so small kindnesses have meant a lot. A Facebook friend whom I’ve never met in person was good enough to share positive feedback after viewing the video of my Rock Camp band’s performance (luckily we were first in the lineup; I kind of feel like I owe a beer or other beverage of choice to anyone who makes it all the way through the song), and, most importantly, he took my interest in pursuing music seriously.

The interesting thing about my Facebook friend is that he’s politically conservative, and we’re both trying not to cut people off because of political differences. I know some people who are doing that, and I understand that they have their reasons, but (rather uncharacteristically, to be honest) I’m trying not to be so quick to give up on some large portion of humanity. It’s nice that some people are affirming my (admittedly shaky) faith in people.