…And here we are, back to the nasty Jell-O. The good news is that we’re heading into the final countdown phase, and Cool Coleslaw Salad is the third-to-last of the savory Jell-O recipes!

I did have to drag myself back from the Mojave Wasteland to do this. I decided to start a new playthrough of Fallout: New Vegas last weekend, perhaps not the wisest decision, but my other distractions are starting to fail me. On the surface it seems kind of strange that a video game set in a dystopian alternate-timeline, post-nuclear-apocalypse future should be so soothing, but I’m starting to form theories about fight-or-flight and stress hormones. Maybe engaging in those imaginary fights allows for a release of stress that’s not possible in the real world, where all we can do is scan our Twitter feeds every morning hoping that World War III hasn’t begun. Also, I like the southwest desert a lot, the bleak beauty and the vast quietness of the landscape, which is captured really well in Fallout: New Vegas. 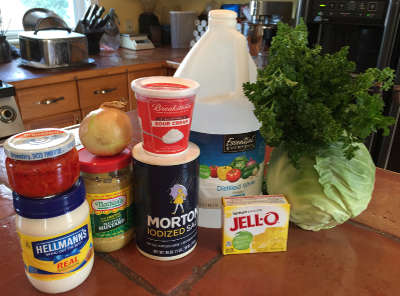 Another motley collection of ingredients…

So I ventured out of my motel room in Novac and into my kitchen to make Cool Coleslaw Salad. There isn’t actually a whole lot to say about this one. The base is lemon Jell-O, but otherwise it’s not so different from a standard, non-gelatinous coleslaw. In that sense, it’s a close cousin to Molded Potato Salad.

A single batch of lemon Jell-O is prepared with a little less cold water than usual, but with salt and vinegar added. A half-cup of mayonnaise and a half-cup of sour cream get blended into the Jell-O, along with a few tablespoons of prepared mustard and some finely-chopped onion. I chilled the resulting savory bavarian over an ice-water bath until it was thickened, and then added shredded cabbage (the recipe calls for three cups, but I probably added more), a few tablespoons of diced pimiento, and a quantity of chopped parsley that was probably more than the tablespoon specified in the recipe. It all chilled in a glass bowl in the fridge overnight, et voila! Cool Coleslaw Salad! 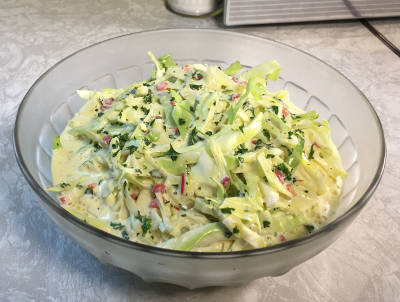 All in all, I’m pretty happy about how it turned out. I’m glad I added extra cabbage, because I think if all the cabbage had been submerged in the gelatin that would have been kind of depressing. At least this looked like “a salad”, and to be honest, I think that visually, at least, it was not unappealing.

While I’m overall relieved to be done with these “sour cream and mayonnaise” recipes, I have to say that Cool Coleslaw Salad did not taste bad. It tasted like coleslaw. The onion and the mustard really cut into the sweetness of the lemon Jell-O, and the sour cream and mayonnaise mixture made sense, for once. The real problem with this dish was the mouthfeel. The combination of a crunchy vegetable and a creamy gelatin is just unpleasant.

For once, Bryan and I were entirely on the same page on a recipe. I gave him some to try, and he actually ate more than a forkful, agreeing that it tasted fine but just wasn’t very nice to eat. The garbage disposal got the bulk of it, so Action Against Hunger will be getting another donation.