At number eight in our countdown, and in time to give you a suggestion for something to do with leftover Thanksgiving turkey, I present: 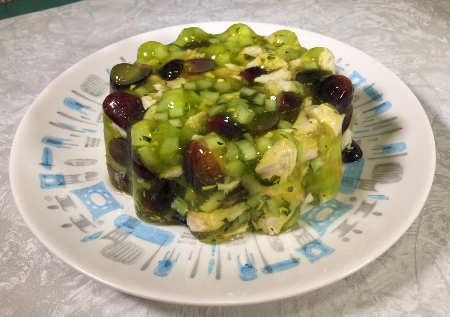 Last year around this time I made Turkey Soufflé Salad, and shopping for the turkey on the day after Thanksgiving meant my choices were limited. I wasn’t particularly happy with the deli slices I ended up using, so I made sure that Jellied Turkey Salad would come up on the editorial calendar before Thanksgiving, and I decided that I would just have to roast a turkey breast to get a satisfactory meat component.

A week or two before it was time to get to work on the Jell-O recipe, it occurred to me that if I was roasting a turkey breast anyway, maybe I ought to just go whole hog and make an early Thanksgiving dinner. After all, I hadn’t gotten to do a Thanksgiving my way in almost 30 years. Instead of my in-laws’ library-paste stuffing, I would make the stuffing I remembered from my youth, a simple dish of celery, onions and peppers sautéed in a lot of butter, mixed with croutons, and moistened with broth. Instead of heavy mashed potatoes beaten with cream cheese (cream cheese? why?) I would make basic potatoes mashed with butter, milk, salt and pepper (and not beaten, so they’d have that “real mashed potatoes” texture). I would have jellied cranberry sauce (with the can shape), a side veg, and brown’n’serve rolls, if I could find them.

So that’s what I did (minus the brown’n’serve rolls, which were not yet available). It was actually kind of fun. Cooking a multipart meal like that has a certain rhythm to it, coordinating the timing of the various elements. It went amazing well considering how long it had been since I’d cooked a big meal like that, although it was not without a few small hiccups. For starters, the turkey took longer to roast than I had been led to believe. I wasn’t totally happy with the gravy, which was probably doomed from the start due to the natural limitation of pan drippings from a lean breast. I’d kind of like a do-over on the stuffing because I couldn’t find herbed croutons and the unseasoned ones, well, they needed seasoning. Also, I found that I am totally lacking turkey carving skillz. Still, it was a nice dinner, and Bryan made a chocolate pecan pie for dessert, and I had leftover turkey for my Jell-O.

Then my procrastination tendencies kicked in and I kind of bollixed up the timing on this, which is why there’s no video for it. (Not that I expect anyone really misses it, but I’ll do an extra “penance” anyway and make a donation to the Boston Food Bank so that somebody else can have a nice Thanksgiving dinner.) We had the dinner last Saturday, and the leftover turkey wound up sitting in the fridge until I got to work on Jellied Turkey Salad on Wednesday evening. I looked up how long leftover turkey is safe to eat, and while most sources said three to four days, I found a discussion thread on Chowhound where people were maintaining that leftover turkey is fine for upwards of a week. Okay, I thought, this will just make it exciting… 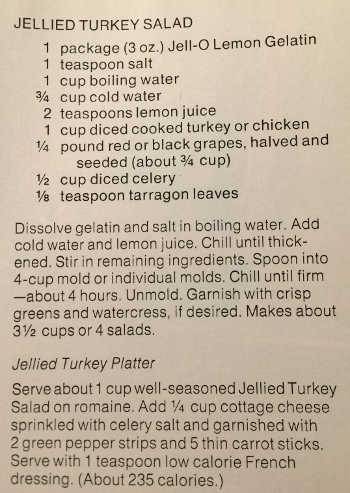 … which is good, because making Jellied Turkey Salad is a bit of a dawdle. It’s your basic prepping of the solid ingredients (I did a little extra of everything, as usual), thickening the Jell-O over an ice water bath, mixing in the solid ingredients, and chilling it in a mold. That old story, one we know so well by now. Since I was making this before we ate dinner, I nibbled at the turkey while I was cutting it up, and found that it was better as leftovers than it had been right out of the oven, and I decided that the bother of roasting it had been worth it.

The mold sat in the fridge for an extra day (what can I say, it was a rough week), so on Friday it was with some trepidation that I unmolded it, took some photos, and sat down to try a piece. Bryan got home from work while I was setting up for the photos, and he assured me that he’d eaten some of the leftover turkey for lunch and hadn’t gotten sick, so that was encouraging.

After tasting it, I’m just as glad I didn’t go to the trouble of making a video, because there were no grimaces. Jellied Turkey Salad wasn’t particularly awful. The Jell-O was too sweet, but there were enough other ingredients in there that the sweetness wasn’t overwhelming. The turkey was fine, and I liked the flavor of the chopped tarragon. As with so many of the savory Jell-O recipes, the flavors just didn’t blend together well, so each bite was a little, I guess you could say, confusing to the palate. When Bryan tried a bite, he was startled; he said it wasn’t what he was expecting.

Jellied Turkey Salad appears in the chapter titled “Salads for the Slim Life”. I imagine that, as with so many “diet” foods of the mid-20th century, the primary function of this dish is to kill the appetite. I was pretty hungry when I tried this, so I ate several bites, but I had no desire to finish my portion, let alone eat the rest of the mold. The garbage disposal got the bulk of it, and Action Against Hunger will get its usual donation.