This week it’s a desultory number four in the New Joy of Jell-O countdown – Ring Around the Fruit Mold. This one comes from the “Centerpiece Desserts” chapter, possibly because it involves a double-batch of Jell-O. Superficially, it appears similar to another Centerpiece Dessert, Banana Nut Ring with Ginger Topping, but unlike Banana Nut Ring, it matched my dark mood this weekend.

After another of those weeks (is there any other kind of week anymore?), I had an unusually social weekend (two parties and an intense bench-press session with my trainer), and coming at the Jell-O, I was exhausted both physically and mentally. Saturday night we went to a work function, which involved a walk about a mile and a half each way in a minor snowstorm because Bryan didn’t feel like driving, and that actually wasn’t too bad, since I got to meet some new people, and the food and wine were okay, but these work things are always stressful because you have to try to be on your best behavior (except the girlfriend of a new employee, who sat at a table and pouted over her phone almost the entire time). Sunday morning we went to a brunch with neighbors at the home of our friends F– and K– who live just a few blocks away, and I had to be careful not to eat to avoid lifting on a full stomach. The topic of “current events” was avoided for the most part, and, surprisingly, there are still lots of other things to talk about, but it always feels like an effort not to start fretting about what’s happening, and we finally caved in with F– shortly before leaving. It sort of helps to know other people are anxious, too, but not that much.

And then there was Ring Around the Fruit Mold, which didn’t help at all. It starts with a double batch of strawberry or raspberry Jell-O (I had a six-ounce package of raspberry, so I used that) and two 15-ounce cans of fruit cocktail (because they didn’t have 30-ounce cans at Target). I made the Jell-O using the juice from the cans for the cold liquid (with water to add up to 1 3/4 cup). The mold chilled overnight, and Sunday afternoon after my workout I made the filling – the drained fruit cocktail, a third of a cup of chopped pecans, a half cup of miniature marshmallows (good thing I had leftovers from last week’s Watergate Salad), and a cup of prepared Dream Whip.

(Speaking of the Watergate Salad, I did bring the leftovers to the lab. I put it in the fridge with a note on it, posted an announcement on Slack that it was there for the tasting – and I ended up being the only one who ate it. I’m starting to feel like I must be either unusually brave or unusually stupid.) 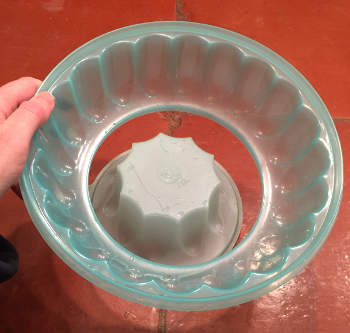 Anyway. If you were ever wondering if it’s really necessary to  use a warm-water bath to loosen up the Jell-O before unmolding it, I now have an answer for you: YES. I set the Jell-O in my Tupperware ring mold, and, feeling lazy, decided to dispense with the warm-water bath. See, the cool thing about the Tupperware ring mold is that the center and the outside are two parts that are held together with the famous Tupperware seal, and when you loosen the center piece, the Jell-O falls easily out of the mold when it’s been warmed on the outside. I discovered that if you don’t warm the mold, even if it’s been lubed, some of the Jell-O can stick to the sides. It was the worst unmolding fail I’ve experienced in a long time. The ring came out in pieces, and I had to flip a couple of chunks over and sort of re-form it on the serving platter.

I piled up the filling in the center of the mold, and it immediately started trying to escape at the weakest point of the Jell-O ring. The washed-out colors of the canned fruit were not enhanced or helped in any way either by being mixed with Dream Whip and marshmallows or in contrast to the red Jell-O. The whole thing looked incredibly depressing. 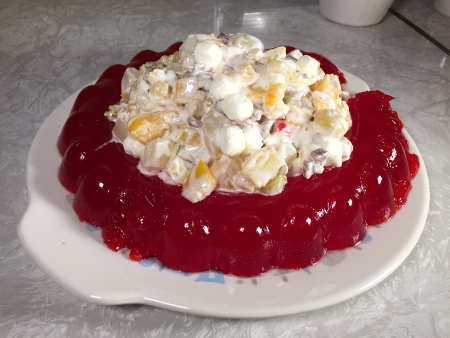 Ring Around the Fruit Mold

Fittingly, we ended up tasting Ring Around the Fruit Mold after dinner while watching the second disk of the second season of Ash vs. the Evil Dead, the episodes where Ash is in the abandoned asylum having his head messed around by Baal. As I dished it out, it occurred to me that it was like something that might be served as a special holiday treat on a psychiatric ward. This recipe tasted at least as depressing as it looked. The Jell-O wasn’t so bad, but the filling was intensely disappointing. I expected it to be kind of like ambrosia salad, but it wasn’t. At all. The texture of the fruit cocktail was particularly creepy mixed with Dream Whip and in contrast with the marshmallows and nuts. Maybe more marshmallows would have helped. Probably not.

I may have to make a bonus contribution to Action Against Hunger this week, because I will be very surprised if we eat any more of this one.