Wow. With this post, we’re at number three on the New Joy of Jell-O countdown, a reboot of Strawberries Romanov. This is a fancy-sounding name for a recipe that’s pretty simple, except for some awkward timing.

Strawberries Romanov is another strawberry bavarian, along the lines of Fresh Strawberry Pie or Layered Bavarian. There’s a bavarian layer, using Cool Whip as the cream component, and a plain Jell-O-and-fruit layer. As you can see in the photos, I’m using the term “layer” rather loosely. And that’s where the awkward timing comes in. 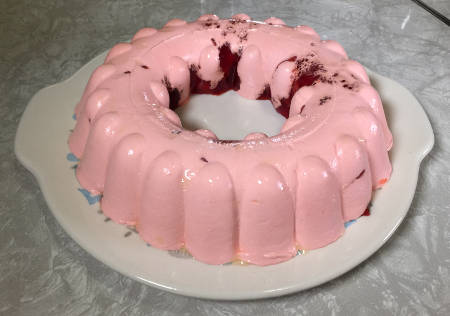 At least this one had fresh fruit in it. I started off hulling and slicing about a pint of fresh strawberries (they were only available in one-pound packages, so I estimated, making sure to save some for breakfast), which I then macerated with two tablespoons of sugar. The berries exuded almost a quarter-cup of juice, to which I added cold water to make a cup of cold liquid.

Next, I had to make a double-batch (using a six-ounce package) of strawberry Jell-O. I measured out 3/4 cup liquid gelatin and added two tablespoons of brandy, one tablespoon of Cointreau, and half of the cold strawberry liquid. I cooled that over an ice water bath until it was slightly thickened, and then whisked in two cups of Cool Whip to make the bavarian layer. The directions say to fold in the Cool Whip, but because it’s almost impossible to deflate Cool Whip, whisking works better. I poured the mixture into a lubed mold and put it in the fridge to set. 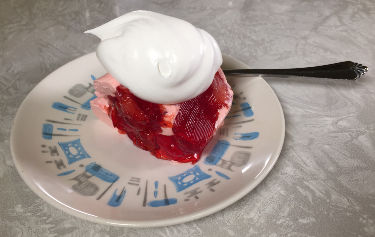 Now, here’s where the timing got wonky, and I’ll admit right up front it was my fault. I got impatient, and you’d think I would have learned by now that patience is sometimes crucial to Jell-O-making. Instead of waiting a bit, I went ahead and prepared the Jell-O-and-fruit layer. I think I was assuming that it would take longer for the Jell-O to thicken, and unfortunately, when it did, the bavarian layer was still pretty soft. I went ahead and tried to put the Jell-O layer on top of the bavarian layer, but it sort of sank in, making something more like a tunnel cake.

I suppose it would have been nice if it had ended up looking like it was supposed to, but I kind of liked the tunnel effect, and of course it didn’t taste any different. (I tried a slice with an extra dollop of Cool Whip. I don’t recommend that. It was a bit much.) Looking at my notes from the last time I made this, I see that I was guessing then, as I do now, that the “Romanov” part of the name is just because there’s a little booze in it. The brandy and Cointreau flavors were subtle. Bryan couldn’t taste them at all, and I could only taste them if I ate the bavarian layer by itself; in a bite containing both bavarian and Jell-O/fruit, I couldn’t taste the alcohol at all. Overall, the flavors blended well together, and as always, using fresh fruit helped. 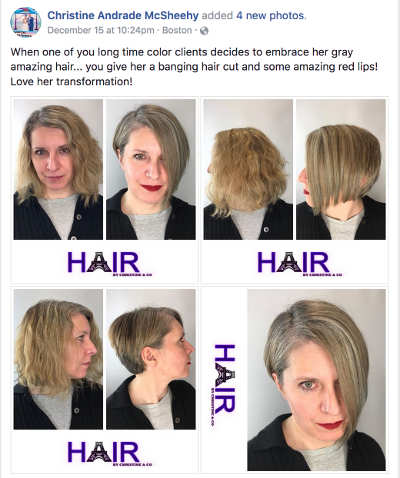 I won’t lie, it’s a relief to be so close to the end of the Project. At the same time, I’ve been at this for so long that not having to make a Jell-O recipe every weekend is going to be kind of a big change. Once I committed myself to the editorial calendar, I wound up structuring my weekends around making, tasting, and writing about each recipe. In a couple of weeks, I won’t have that structure anymore.

Meanwhile, New Year’s seems like as good a time as any to make a few changes. I plan on getting back on track with learning guitar, adopting a new training regimen at the gym, and I just started the process of letting my hair go gray, which is actually pretty involved after dying it for years. I think 2018 is going to be rough, and I’m just not feeling the cute, soft look of blonde waves anymore. It feels like a good time to be heading towards crone-hood.