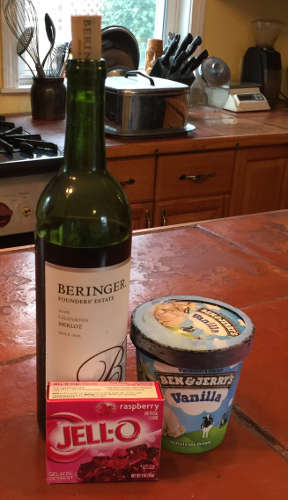 Since the required Jell-O flavor is unavailable, all bets were off with regard to the other ingredients: water, sherry, and vanilla ice cream. We don’t keep sherry around, because I’m not fond of fortified wines. That may be because of an experience I had early in my drinking career, when some well-meaning legal-drinking-age person bought me a bottle of tawny port, on which I got very drunk and subsequently very sick.

Still, I do like how alcohol can enhance the flavor of Jell-O, so I decided to substitute a less-sweet wine. I thought I’d try for a full-bodied red wine, since I was losing some depth of flavor with red raspberry Jell-O, and I had a little glimmer of inspiration from a pleasant memory of life in Brooklyn. Several blocks from us in Park Slope there was a café called the Chocolate Room that did wine pairings with desserts, and they had a nice raspberry wine that went well with chocolate cake. I thought if I could find a raspberry wine here, it might work well with this Jell-O dish, so I went to our local hipster liquor store*, only to be thwarted once again.

I had to turn to my miniscule wine stash, hoping I had a red that wasn’t “corked“, or vinegar. Luckily, I had a Beringer 2006 merlot that’s held up well, so I used that in the recipe instead of sherry. There was a brief moment of panic when I noticed that the raspberry Jell-O and merlot combination smelled rather like a household cleaner, but that aroma dissipated eventually.

If you’re a regular reader of NJoJ, you might have already guessed that this is an ice-cream-based bavarian, and all there is to it is preparing the Jell-O as directed, substituting a quarter-cup wine for a quarter-cup of cold water. A pint of vanilla ice cream (I went with an old favorite, Ben & Jerry’s) is gradually melted into the liquid gelatin, and it gets chilled until firm. That’s it – hence its inclusion in the chapter titled “Nice Easy Things to Do with Jell-O”. 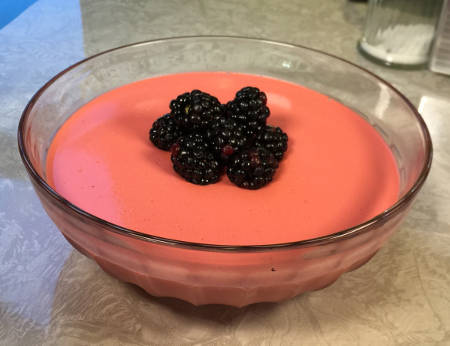 I served my Raspberry Ice Cream Dessert with fresh blackberries, and it was okay. The wine flavor was a subtle and sneaky thing, and it didn’t blend well with the gelatin and ice cream flavors, but it wasn’t unpleasant. Otherwise, this was quite sweet. Also, the texture was very soft. I think this would be particularly good to have while recovering from dental surgery.

* Funny story: One time Bryan and I were at City Liquors when a bro came in and asked one of the store employees if they had “pong balls”. “You know, the balls you play beer pong with?” The employee was bemused by the question. They carry a good selection of wines and a large assortment of craft beers; it’s definitely not a “pong ball” kind of place.