I was a bad girl this week. I deviated significantly from the original recipe for Peach Gem Pie, which is, as you can probably tell from the old photo, just orange Jell-O with peach slices in it, in a pie crust. Oh, yes, and there’s a little almond extract in the Jell-O. Because of my Orange Boycott, I was planning on substituting peach Jell-O for orange anyway, but then after the week we’ve had here in the U.S. and abroad, I just couldn’t face Jell-O in a pie shell. I just couldn’t.

So it occurred to me that I could do what the U.S. Congress failed to do this week – I could take a not-so-good thing and make it better. Following on the success of Easy Fruit Tarts, I decided to turn Peach Gem Pie into a Peach Gem Tart.

I started with Julia Child’s sweet short crust recipe and made a nine-inch tart shell. I spread a layer of French vanilla Jell-O instant pudding in the bottom of the tart shell, arranged Del Monte canned peach slices (so sue me, peaches are well out of season right now) in a pretty pattern on the pudding, and spooned thickened peach Jell-O over the peaches to form a glaze. I forgot to add the almond extract to the Jell-O (rather than listening to music while I worked, I was listening to NPR programming and got distracted) but remedied that somewhat by serving the tart with almond-flavored whipped cream.

The end result was not bad at all. It certainly looks prettier than the pie shown in the book. Orange Jell-O has a garish hue, but peach Jell-O is actually a rather pretty color. The flavor is subtler, too, and I wonder whether it would have made a difference if I’d remembered to add the almond extract. Probably not. These Jell-O recipes tend to be pretty timid about the added flavors. I was a little dubious about whether the almond flavor would go with the peaches, but in the whipped cream it worked much better than I expected.

I did make a few mistakes. The main one is that the crust turned out tough; most likely I overworked it, got a little cocky after it turned out so well last time. Another is that I added too much almond extract to the whipped cream. A teaspoon of vanilla extract to a half-pint of whipping cream works well; a teaspoon of almond extract is, I’m thinking, about twice as much as you want. (The aftertaste, it burns…) Finally, one three-ounce package each of pudding and Jell-O is way too much for a single nine-inch tart. It was fine because I ate the leftovers, but if anyone wants to try to recreate this, I recommend planning on making two tarts. Seriously, this turned out to be a decent dessert. Bring them to Easter dinner. The colors are seasonal, and I could see this working well after a main course of ham. Ham from a can. Oh, the memories… Did I mention it was a rough week?

This is a weird one. I have a very vague recollection of having made Easy Fruit Tarts, and I even have a page of notes on it from the original Project, but it isn’t numbered, and I don’t have any pictures. Given where it appears in my notebook, I must have made it just as the burnout was setting in, and my notes bear that out. I made them with a graham cracker crust, and wound up using soy milk to make the instant pudding because we didn’t happen to have any dairy milk. (Ick.) I made the topping as fruit-in-Jell-O to save time, remarking that “I don’t revere The New Joys of Jell-O like Julie allegedly did Mastering the Art of French Cooking“. I didn’t indicate whether it was any good. I’m not sure I ever posted it.

So this was ripe for a reboot. It’s simple, small tart or pie shells with a layer of pudding, a layer of fruit, and a layer of Jell-O “glaze” on top – really not so different from tarts I’ve bought at patisseries in New York and Cambridge.

Over the past week I’ve been thinking about making Easy Fruit Tarts, and about its coinciding with Mother’s Day, and how I wanted to approach it in light of that. In the Your Humble Narrator page, I mention that the women of my mother’s generation in my family bought into the food processing industry’s message that making food from scratch is unnecessary drudgery, and too difficult, so processed food is the modern way to cook, and a godsend for the American housewife. As a consequence, I didn’t learn to cook from my mother. She opened boxes and cans. She thawed things. Sometimes we had pancakes for supper, or fried dough (from a store-bought stash in the freezer) with butter and sugar. Cakes, brownies and cookies were made from mixes – just add eggs and oil. The challenging part was standing on a chair to reach the mixing bowl on the counter and struggling to hold up the hand-held mixer for two minutes.

When I was in high school, I started watching PBS when I got home from school, a lineup of Bill Alexander and Bob Ross (the so-called Alexander technique of oil painting) and Julia Child. I learned a little about oil painting, and so much about cooking. I think the series that was running on WGBY at that time was Julia Child and Company, and the recipes she made served to demonstrate a lot of fundamental techniques, like working with eggs, making a roux, and pastry basics. It wasn’t so much that she made it all look easy (indeed, she famously made mistakes here and there, and then explained with aplomb how to recover from them) but she showed methodically what to do and why, and made it clear that if you took care and paid attention, you too could produce choux pastry, chocolate mousse, or a soufflé.

I tried some recipes, and had some success, and as I grew up and moved out on my own, I moved steadily away from always using convenience foods. I can’t remember the last time I used  a boxed mix to bake a cake, let alone a tub of store-bought frosting. For a long time I’ve thought of Julia Child as “my mother in the kitchen”, and she’s who I think about, mainly, on Mother’s Day. 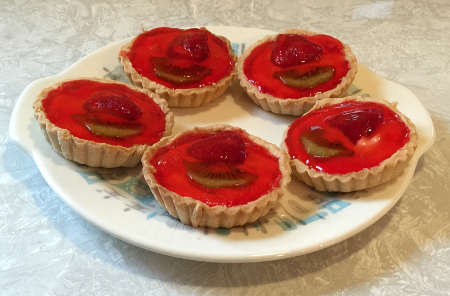 So around comes Easy Fruit Tarts, and the recipe calls for “8 baked 3-inch tart shells (frozen, packaged, or homemade)”. I decided to opt for homemade, and, remembering the very good tarts I’ve had over the years, I selected the sweet short crust recipe from Mastering the Art of French Cooking as the foundation for Easy Fruit Tarts. Short crust is one of those simple recipes that require care and attention to do right. It’s mostly butter and flour, and you have to keep the dough cold, and try not to overwork it. I was a little intimidated, but tried to maintain focus (these types of recipes become a sort of Zen exercise). Most of the drama of making the tart shells involved buying the little false-bottom tart pans, which are kind of stupid expensive for what they are. Still, we could use them for other things, and after a long midday phone confab, Bryan agreed to pick up a set from Tags on his way home.

The rest of the recipe was drama-free. I whipped up a box of instant Jell-O French vanilla pudding, which formed the bottom layer inside the tart shells. Sliced strawberries and kiwi were placed on top of the pudding, and it was all topped with thickened strawberry Jell-O. For anyone trying to make this themselves, I would recommend doubling the number of tart shells, or using larger tart shells, because I wound up with a lot of leftover pudding and strawberry Jell-O. 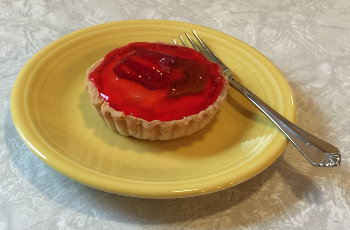 A bit of all right…

For Mother’s Day, Bryan invited his mom over to Freak Mountain for lunch, and when she heard that “Jell-O tarts” would be on the menu, she asked him to make it breakfast instead. That’s what we did – and she doesn’t know what she missed. Easy Fruit Tarts are a bit of all right. I’m relieved to say that the sweet short crust was a success, a not-too-sweet complement to the pudding, fruit and Jell-O. As you can probably tell from the photos, there isn’t a lot of Jell-O in this dish, so it lends more flavor than texture, a good thing. I would say that in this case the whole is greater than the sum of its parts, and I’m not at all worried about this going to waste.

The success of the short crust has turned me on to the possibilities of other tarts made with real ingredients, fruit tarts with homemade custard or maybe lemon curd, or savory mini-quiches. The weirdest thing of all about Easy Fruit Tarts is that I find myself thinking “I’m really glad I made this!”