I have to say, after a few “scary” Jell-O recipes that turned out to be not so scary, I was really hoping that Jellied Gazpacho would turn out to be fairly nasty. Oh, yes. I had all kinds of plans for this one. First, there was the drinks pairing – my first instinct (a very wrong one, I know) was to go for Corona, or tequila, or a Mexican boilermaker. (Yes, that’s a thing.) Then I decided to look up the origin of gazpacho and found that it comes from Andalusia, arguably the most historically and culturally important part of Spain, so I didn’t want to treat it like a common Tex-Mex side dish.

I remembered that a batch of gazpacho had figured prominently in Pedro Almodovar’s 1988 film Women on the Verge of a Nervous Breakdown. The gazpacho had been spiked with something – my recollection was that it was vodka (which you have to admit would be pretty good), but when I looked it up I found that it was sleeping pills. That didn’t seem like a good idea, and I ended up scrapping the drinks pairing altogether.

Herbs and veggies – this actually kind of looks good…

If we’re being honest, it’s hard to bash Jellied Gazpacho for the ingredients. It’s mostly fresh vegetables and herbs. The traditional binder for this cold soup is bread (often stale bread is used, presumably as a way to avoid food waste), and that has been replaced by lemon Jell-O. Fresh garlic has been replaced here by garlic powder (the recipe calls for garlic salt, which I thought we had, but evidently Bryan bought the powder instead), but at least the flavor is there.

Even Bryan, a mushroom fan, admitted that these canned ‘shrooms look like slugs

The one ingredient I was seriously dreading was the canned mushrooms. I’ve always disliked mushrooms, in particular the canned ones, which develop an unpleasant mouthfeel in the canning process. I’ve tried to learn to like fresh mushrooms, without much success, so I didn’t see any real reason to substitute them for the canned ones here.

Jellied Gazpacho should have been a pleasure to make, given all the lovely chopping of lovely fresh ingredients, but the prep work on this was an annoying experience. It turns out that Bryan has been slacking on the knife-sharpening duties. You see, years ago he decided that he was something of a “foodie”, and one of the foodie toys he picked up for himself was a professional-grade knife sharpening kit. We have a decent set of Henckels knives, and keeping them sharp is definitely worthwhile – but perhaps more of a commitment than Bryan was prepared to make.

To be fair, the dull knives did make the prep work feel more “authentically 1974”. Before the Food Network put professional chefs in our faces, your average mid-century middle-class or working-class homemaker probably wasn’t aware of the importance of keeping knives sharp. Knives would get dull (probably weren’t that sharp to begin with), and she’d just operate on the assumption that chopping vegetables was a lot of slow drudgery, Maybe she’d get suckered into buying the Ginsu knife before deciding that fresh vegetables are too much trouble to do for anything other than special occasions.

(Looking into this a little, I’m thinking that “the decline of knife sharpening” could easily become its own post. But I digress…) 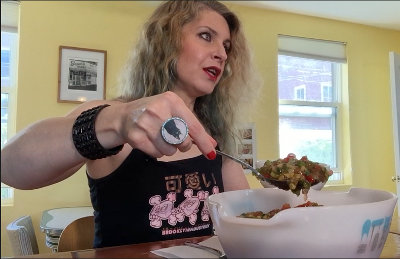 Dishing out a heaping helping of Gazpacho, Jell-O style

Apart from the vegetable chopping, making this recipe is pretty simple. Once the veggies are chopped, they’re combined with the seasonings and left to sit and marinate while a double batch of lemon Jell-O is prepared and thickened. Then, the veggies and Jell-O are combined, chilled to thicken a bit more, et voila! Jellied Gazpacho.

This is a “loose” gelatin dish, which was a bit disappointing because in the back of my mind I had been anticipating another molded one, which would have been more of a challenge. Another disappointment – this one didn’t taste bad at all. I had been hoping for a nasty one to give the blog a bit of, you know, conflict, but I had been able to chop the mushrooms up finely enough that they weren’t really noticeable, and between the vegetables and the seasoning there were enough savory flavors that the sweet lemon flavor of the Jell-O was barely detectable. 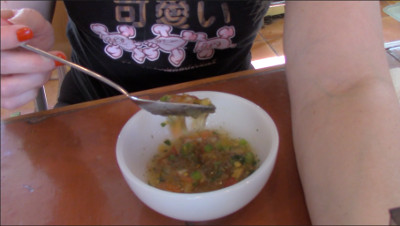 But in the end, was there really any reason for gazpacho to be jellied in the first place?

The main issue I had was with the texture. The gelatin just did not add a nice texture to this cold soup, and the veggies were a bit buoyant in it, so I wound up with a fair amount of seasoned lemon Jell-O in the bottom of my bowl as I ate this. I decided to try running the Jellied Gazpacho through a few pulses in the Cuisinart, and that actually helped. The whole thing seemed to be blended better, and it stayed blended. We even managed to eat some for supper (with a fresh baguette and butter, and a Pepperidge Farm frozen chocolate cake for dessert). Still, even though I finished my portion (Bryan didn’t), I didn’t want any more.

I could see myself making gazpacho again, but with a more traditional recipe, using bread as a binder. Using Jell-O did not in any way enhance or improve on the concept. It didn’t make it all that weird or scary, either. It was just “meh”. A donation is being made to Action Against Hunger because somebody should be getting some kind of satisfaction out of this.