Did you miss me last week? No? Okay, but I missed you. I missed you so much, I made you this lovely Jellied Salad Niçoise.

It’s hard to imagine, but all of these things went into a single Jell-O recipe.

These savory Jell-O recipes keep disappointing me – not because they’re so bad, but because they’re not bad enough. Jellied Salad Niçoise had so much potential, and then failed to live up to it. Just look at the motley crew of ingredients I had to assemble for this. Anchovies! Mayonnaise! Italian dressing! The only way that this could come out was “badly”.

So I got stuck into preparing it, and this was possibly the most involved Jell-O recipe I’ve done so far. It took a good two hours to put together, much of which involved chopping vegetables, although it all started off with hard-boiling an egg.

Proof that I am not making this up…

Rather than describe the whole process, I’m just going to give you a picture of the recipe, straight out of the book. Even just reading it, it sounds kind of nuts.

The weirdest part is that it requires what I think of as “a single batch” (that is, a three-ounce box) of Jell-O, with less cold water than usual. It wasn’t enough to cover the solid ingredients in the mold, and I was sure that when I went to unmold it, the whole thing would fall apart and be a complete disaster. I was pretty excited by that prospect, because I thought it would make for some good video. It’s been too long since this blog has lived up to its true potential as a sort of culinary “Jackass”, and I was hopeful, but this surprised me. As you can see from the photo, Jellied Salad Niçoise unmolded unexpectedly well. I was sure that the loose bed of chopped lettuce at the bottom would make the whole thing unstable and lead to a collapse, but I suppose by now I should have more faith in the Jell-O.

For eating, it wasn’t very good, but it could have been worse. It turned out that one chopped up boiled egg wasn’t enough to stink up the whole dish, and even the anchovy-tinged mayonnaise was less repulsive than it could have been (unless, I suppose, you’re one of those people who just hate mayonnaise on principle). 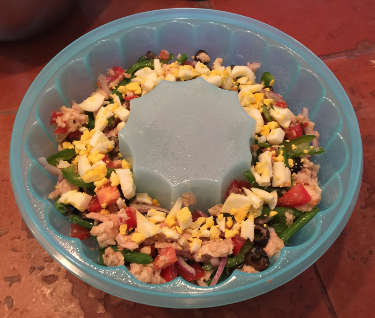 While I was in the midst of making it, Bryan strolled into the kitchen and pointed out that, if not for the Jell-O, this wouldn’t be such a terrible recipe. Indeed, the Salad Niçoise didn’t look so bad in the mold before I poured Jell-O over it and piled on the chopped lettuce. Aside from leaving out the Jell-O, I would have preferred a simpler dressing, just some oil and vinegar with a little salt and pepper, which is what I generally prefer for salad dressing. We don’t use store-bought bottled dressings, which is why I used the Good Seasons.

Needless to say, Bryan and I didn’t eat more than one portion of Jellied Salad Niçoise, and the rest went straight into the garbage disposal. A donation is being made to Action Against Hunger to atone.

I’m trying not to go too heavy on the politics here, but I’m still resisting, and for the video I wore a “pussy hat” made by my friend Donna, who has an Etsy shop and has been doing a brisk business in pussy hats lately. (She also makes other kinds of hats, jewelry, accessories, and toys.) If you like it, please check out her shop, Via Donna, at https://www.etsy.com/shop/ViaDonna.