Howard Johnson’s got its start as a soda fountain in Quincy, Massachusetts in 1925, somewhat improbably expanded into a chain of restaurants during the Great Depression, and became a pioneer in American road food as the automobile became King of the 20th Century. For decades, families on road trips would see an iconic orange tiled roof and know that they could get a good sit-down meal with 28 flavors of ice cream to choose from for dessert. During the 1980s, the Howard Johnson’s brand was sold and passed from conglomerate to conglomerate, while interstate highway rest stops were taken over by fast food chains, and HoJo’s restaurants went on a steady decline. On September 6, 2016, the Howard Johnson’s restaurant in Bangor, ME will close, leaving only one restaurant in Lake George, NY to carry on the legacy.

My family seldom traveled, and most of the few trips we took were within Massachusetts (except for one summer week when the seven of us crammed ourselves into a neighbor’s tiny vacation cottage in New Hampshire) so I don’t really have any childhood memories of “road food”. My HoJo’s memories involve the Howard Johnson’s restaurant in Times Square in New York City. I went there twice. 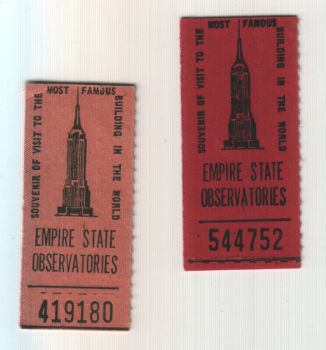 “Souvenir of Visit to the Most Famous Building in the World”

The first time was in the summer of 1977. Fellow older people and/or history buffs will recognize that as the summer when the New York City police were hunting down the serial killer known as Son of Sam. It was also a low point for NYC generally, but for some reason, my grandmother decided it would be neat for her and me to spend a couple of days there with a friend of hers and her friend’s granddaughter.

Actually, I enjoyed spending time with my grandmother, and it was a fun trip. I remember that we stayed at the Taft Hotel, which must have been this one in Times Square. The centerpiece of the trip was seeing the original Broadway production of Annie (with Andrea McArdle in the title role), and we also did a bit of sight-seeing, going up to the observatory in the Empire State Building and visiting the Statue of Liberty (although we didn’t go up to the crown, presumably due to the lack of elevators). I remember that I had never been on a train before so I really wanted to ride the subway, but my grandmother refused, insisting that it was too dangerous.

On the ferry approaching Liberty Island

Since it was almost 40 years ago, my memories of the trip are hazy, but one of the few clear memories I have is of having supper at the Howard Johnson’s. In particular, I remember the part where I ordered dessert. I wanted ice cream, and growing up in the Friendly’s company town, I naturally assumed that all other restaurants only had a few flavors of ice cream – chocolate, vanilla, strawberry, and maybe one or two others. Unaware that HoJo’s were famous for their 28 flavors, I asked the waitress what they had, and she patiently starting going down the list, from memory. (Belately, I am impressed.) Luckily, peppermint stick was near the top, and since that was my favorite, I stopped her there.

Another thing I remember is almost getting hit by a cab. It was the first time, but not the last.

Milo and Bryan in our Park Slope digs, December 2006 – already packing for our March 2007 move back to MA.

The second time I went to the Howard Johnson’s in Times Square was while Bryan and I were living in Brooklyn. We were living in a tiny, noisy, leaky, roach-infested shithole of an apartment in a still-gentrifying part of Park Slope, saving up to get out, and trying to make the best of our New York experience in whatever ways we could. It was probably late 2004 or early 2005 when we heard that the restaurant, one of the last old-school holdouts in the shiny new post-Guiliani Times Square, would be closing, and we decided that we had to go.

It looked as though it hadn’t changed since it opened in 1959, and it probably hadn’t, all dark wood paneling and burnt-orange vinyl. Almost certainly it was just the same as when I went there with my grandmother in 1977. We had the signature clam strips, and ice cream for dessert. Mine was peppermint stick. 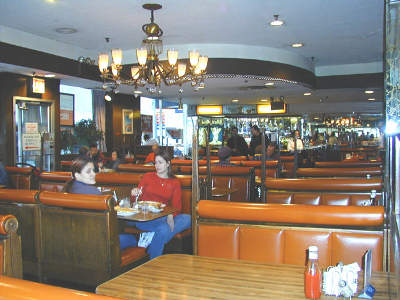 Interior of the Times Square HoJo’s (uncredited photo from the internet, relatively recent)

It’s not that I want them back so much, but it’s important to know that these things existed. When we forget history we’re doomed to repeat it, yes, but it’s useful to remember where we’ve been as we move on to where we’re going. Also, it’s good to be aware of our place in history. Each of us is part of a bigger picture, a picture that includes David Berkowitz and clam strips…